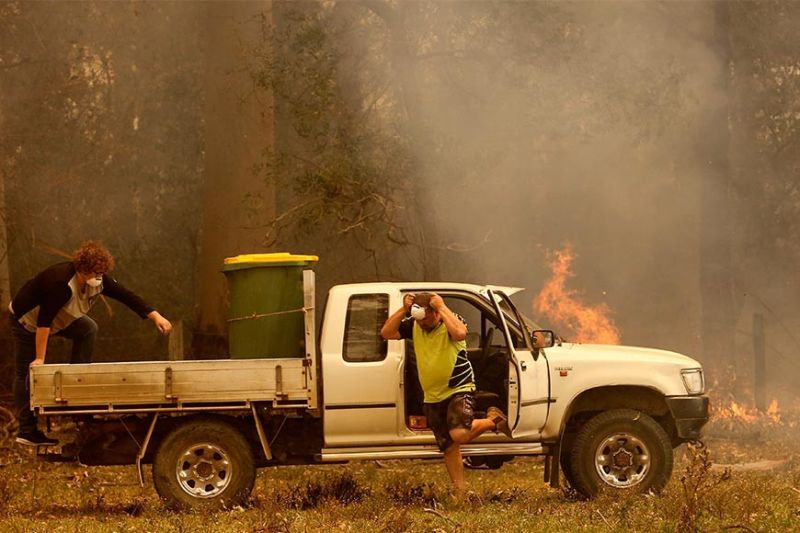 AUSTRALIA. Jamie Fato prepares to stop an out of control fire entering Owen Whalan's property at Koorainghat, near Taree, New South Wales state, Tuesday, November 12. Hundreds of schools remained closed across Australia's most populous state on Tuesday and residents were urged to evacuate woodlands for the relative safety of city centers as authorities braced for extreme fire danger. (AP)

CANBERRA, Australia -- Ferocious wildfires were burning at emergency-level intensity across Australia's most populous state and into Sydney suburbs on Tuesday, November 12, as authorities warned most people in their paths that there was no longer time to flee.

New South Wales state is under a weeklong state of emergency, a declaration that gives the Rural Fire Service sweeping powers to control resources and direct other government agencies in its efforts to battle fires. The worst fires on Tuesday emerged in the state's northeast, where three people have died and more than 150 homes have been destroyed since Friday.

A catastrophic fire warning was in place for Sydney, Australia's largest city, where a large blaze threatened homes on Tuesday afternoon in northern suburban Turramurra, 17 kilometers (11 miles) from the city's downtown area.

A firefighter suffered a fractured arm and ribs before the fire was rapidly contained with the aid of a jet dumping fire retardant and a helicopter dropping water, officials said. Turramurra residents reported trees catching fire in their backyards from embers.

Rural Fire Service Commissioner Shane Fitzsimmons said many people had heeded his warning and evacuated their homes in the danger zone well ahead of the escalating fire threat on Tuesday.

"We've got very tight, winding roads into a lot of these areas, which is why we talked about leaving early as the safest option," Fitzsimmons told reporters.

"The last thing we want to do is be managing mass evacuations in pretty difficult to access areas and running the risk of having a whole bunch of congested roadways and seeing people incinerated in their cars," he added.

Of 85 fires burning across New South Wales, 14 were rated as emergencies and burning out of control by late afternoon, the Rural Fire Service said. That's the largest number across the state in decades apart from Friday, when an unprecedented 17 emergency fires blazed.

"It is too late to leave on most of these fires and sheltering is now your only option as fire approaches," Fitzsimmons said.

Kirby Ardis took Fitzsimmons' advice, driving her family from their home in the small town of Deepwater 42 kilometers (26 miles) to the larger center of Glen Innes at about midday Tuesday.

"With the winds, the embers are traveling many kilometers, so it's just not worth it," she said. "The general consensus is that people are just evacuating. Better safe than sorry."

Alison Johnson said she'd stay as long as she could in the village of Nana Glen to protect her business, the Idle Inn Cafe, from embers that can carry 30 kilometers (19 kilometers) ahead of the fire front.

"If one ember lands on it, it'll go up," Johnson said. "When you look above the paddock at the end of the street, you can see the smoke behind the tree line."

"The trees are a muted gray, shrouded in smoke. The first sign of a fire front and we'll be out," she added.

Winds were reaching 80 kilometers per hour or 50 miles per hour in some areas and were expected to gather pace as the day progresses. There were reports of potential destruction of homes south of the town of Taree near where a 63-year-old woman died in her home on Friday, Fitzsimmons said.

A "small number of properties" appeared to have been destroyed or damaged by late Tuesday, he said.

More than 600 schools and technical colleges were closed because they are close to woodlands at risk of fire.

The Australian fire season, which peaks during the Southern Hemisphere summer, has started early after an unusually warm and dry winter.

More than 1 million hectares or 3,800 square miles of forest and farmland had already burned across the state this fire season, more than three times the 280,000 hectares or 1,080 square miles that burned during all of last season. (AP)