Bzzzzz: 2 big kidnapping rescues by Lacson. How did Lapulapu look like? 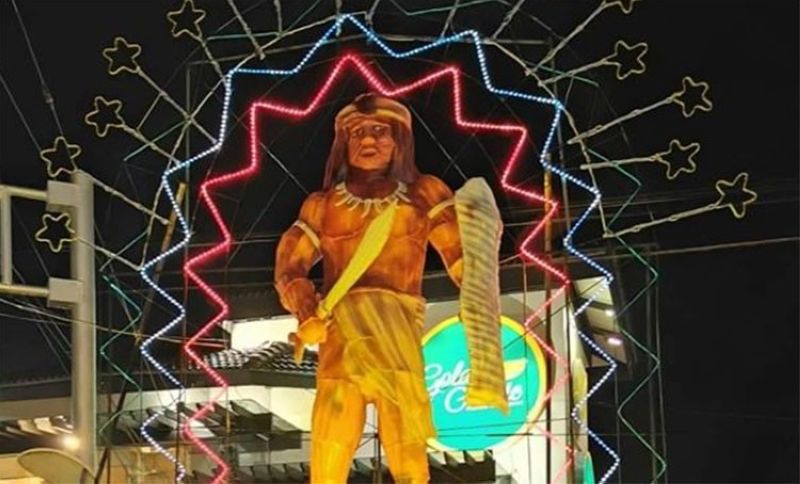 [1] HOW LAPU-LAPU LOOKS AS CHRISTMAS ICON. Made of recyclable materials, the icon of Lapulapu, center attraction in the lighting ceremony that launched "Pasko sa Lapu-Lapu" Monday night (November 11) was not pleasant-looking.

[2] SGB VS SFI? It does not have to be a competition. The Sinulog Governing Board and The Sinulog Foundation Inc. can work together but only if they agree on the terms of collaborative work and abide by them. The announcement Monday (November 11) by SGB of new Sinulog activities tells otherwise. SGB executive director Barney Borja said it does not need the approval of SFI, that's why there's an SGB. Heavy with meaning, which contradicts what Vice Mayor Mike Rama earlier said about how things will be done.

[3] 'BUILD, BUILD, BUILD.' The massive infrastructure program, started in 2016, has less than three years more to show impressive results. Senator Franklin Drilon of the minority seeks bleak prospects. Because of its hugeness though, it could still achieve something if it would keep one "Build" out of three by 2022. "Bui" or "Buil" would not do.

Other kidnap victim a grader

The rescue of Robina Gokongwei, eldest daughter of John Gokongwei Jr. and a UP Diliman senior at the time, and her cousin Celina Chua from kidnappers was in 1981, when then lieutenant colonel Panfilo Lacson headed the PC Metrocom intelligence service group. Senator Ping was with Metrocom in Manila from 1971 to 1986.

Lacson later served with Cebu Metrodiscom from 1989 to 1991. But there was another major kidnapping and rescue in Cebu during Ping's stint here. An item in the August 19, 2019 Mindanao Times column "Rough Cuts" by Vic Sumalinog mentioned that an elementary-grader son of a multi-millionaire retail magnate based in Cebu was kidnapped and Lacson rescued the boy.

The Gokongwei kidnapping happened when Ping was Metrocom ISG head in Manila, while that of the unnamed son a retail magnate occurred in Cebu during Lacson's service here.

The rumor then, which looked uglier and more unkind now, was that the kidnappings were staged to make Lacson look good. Meaning, his group did the kidnapping and the subsequent rescue, then Ping would refuse the offered the reward.

Sumalinog, formerly based in Cebu, wrote that the uncle of the kidnapped scion who "runs several malls in Davao and other cities nearby" offered millions of pesos as reward to the police. Lacson refused, as he did earlier with John Gokongwei's offer of P400,000 cash upon the rescue of Robina and her cousin. Sumalinog trusted the word of the businessman who, Vic said, is his friend. He wrote about it in Mindanao Times two months ago, long before Lacson tweeted last Sunday (November 10) about John Gokongwei's reaction to Robina's kidnapping.

An interesting sidelight to the Lacson tweet was the reaction from Robina on Monday (November 11), the day after Ping's tweet.

After five days in captivity and still getting no money, "the sidekick of the leader of the gang, came to me with a worried and angry face," Robina related at a eulogy for her dad. "He said, 'Anim pala kayong magkakapatid! Akala ko nag-iisa ka. Sabi ng tatay mo, pwede ka na ipamigay kasi mayroon pa siyang limang anak. Ano ba 'yan."

Robina was sad to learn that "my dad was giving me away." She didn't know then that Lacson had advised John to prolong the negotiation while the search for the kidnappers was going on. They found her and her cousin on the seventh day.