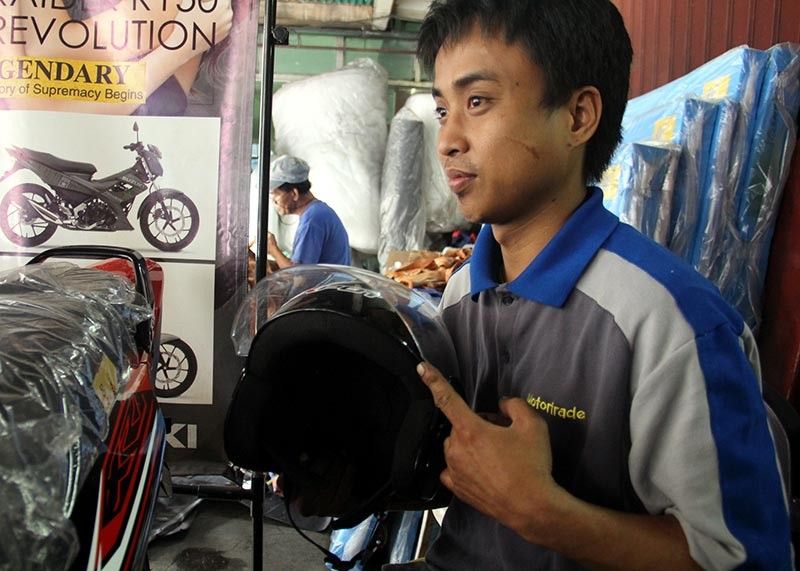 GILBERT Gandoles remembers them well -- three road crashes over four years that left him with bruises and scars. In those times, he rode a motorcycle without a helmet.

The first one was in 2013 on a national highway in Camiling in Tarlac province. He was with a passenger, who like him, was not wearing a protective headgear as mandated by law.

Both sustained injuries when they fell off the two-wheeler following an abrupt stop to avoid colliding with a tricycle.

Gandoles was unable to move his arms for a month as a result of that crash.

A scar on his left cheek is a permanent reminder of that incident.

After he recovered, he bought himself a half-face helmet but it did not protect him enough when he crashed again in Camiling in 2016, as he avoided a dog crossing the street.

Learning his lesson, he purchased a full-face helmet, which he never failed to use whenever he rode his motorcycle.

But one day in 2017, he rode his motorcycle while under the influence of alcohol, lost control and fell to the ground. He was wearing his full-face helmet but the chin straps were not fastened, leaving the headgear loose.

He sustained a wound on his chin after the fall.

Gandoles, a motorcycle rider for nine years, has wisened up.

Before getting on his motorcycle, the 26-year-old, who now works as a mechanic in Benguet's capital town of La Trinidad, makes sure his helmet is properly strapped. He is also more conscious of dangers that drivers and commuters could face on the road.

"We cannot control what's going to happen on the road. Even if we take precautions, there are still risks," Gandoles said in Filipino. "Better to be safe so be in full gear, with a helmet."

In and around Benguet, there are many like Gandoles who are now more safety conscious.

The province, known for its picturesque mountains and cool climate all year round, this year passed an ordinance mandating the use of reflectorized vest to reduce road crashes involving motorbikes and other vehicles, especially in foggy weather or when visibility is poor.

But there are those who still flagrantly violate the helmet law, almost a decade after the measure was passed. In Baguio City alone, there were 531 apprehensions from January to November 7, 2019, an increase compared to 447 in 2018, according to the City Police Traffic Management Office.

Geographically, Baguio is part of Benguet but is administered independently from the province.

Republic Act 10054, also known as the Motorcycle Helmet Act, mandates drivers and back-riders to wear standard protective motorcycle helmets while driving, whether long or short drives, and in any type of road and highway.

Under the law, violators are fined P1,500 for the first offense, with fines increasing to P10,000, plus confiscation of driver's license, for the fourth and succeeding offenses.

Police Master Sergeant Elmer Guzman, Baguio Traffic Management Investigation chief, attributed the increase in apprehensions to the strict implementation of the law even as many violators offer flimsy excuses for not wearing a helmet.

He said some would just say they were running errands and traveling short distances. Others were surprised to find enforcers in checkpoints.

A 45-year-old motorcycle rider whose identity asked not to be named said he opted not to wear helmet because of short travel distances.

"Short ride lang naman kasi ang byahe ko. Di lumalagpas ng 10 minuto at hindi naman highway ang dinadaanan ko," said the rider, who has been driving motorcycle for 20 years for personal use and for his work, adding he have not been involved in road crash.

In other parts of the Cordillera region, particularly in Kalinga province, cases of deaths of motorcycle riders were recorded because of not wearing helmet.

The Public Order and Safety Office in Tabuk City, Kalinga is expected to heighten implementation of the "no helmet, no travel" ordinance to curb violations and also address increasing cases of minors riding motorcycles and who are involved in road crashes.

Baguio City Police Traffic Management Unit chief Major Oliver Panabang said many commuters prefer the motorcycle as means of transportation but he acknowledges the high risks involved especially because there are those who have not undergone proper training on how to ride the motorized two-wheeler.

He also noted the absence of clearly designated lanes for motorcycles in the city given the narrow roads in the central business district.

Based on the records of the Land Transportation Office in the Cordillera Administration Region, there are more than 20,000 motorcycles, both private and government-registered, in Baguio City alone.

And these two-wheelers are increasingly involved in road crashes, police data show.

According to data from the World Health Organization (WHO), more than 286,000 motorcyclists globally were killed in road traffic crashes in 2013, with 90 percent of the incidents occurring in low to middle income countries.

In the Philippines, about 11,000 people die on the country's roads due to crashes every year and half of them are motorcycle riders, the agency says.

Motorcyclists are among the most vulnerable road users, the WHO explains, because they share traffic space with bigger vehicles and their lack of physical protection increases the risk of injury in the event of a crash.

One significant intervention, it points out, is the use of protective helmets designed to reduce the risk of head injuries. Wearing a standard motorcycle helmet correctly, it says, can reduce the risk of death by 40 percent, and risk of injury by 70 percent.

But not just any type of helmet will provide ample protection.

In Baguio, as in other cities, all manufacturers and importers of standard protective motorcycle helmets are required to secure a Philippine Standard (PS) license and Import Commodity Clearance (ICC) certificate, prior to the sale and distribution of their products in the market.

Only standard protective helmets bearing the PS or ICC mark are allowed to be sold in the market. Any seller or dealer found offering helmets without the ICC mark of PS sticker will be fined no less than P10,000 but no more than P20,000.

According to the Online Electronic Injury Surveillance System (ONEISS), hospitals at the local and national level in the fourth quarter of 2017 report that 57.3 percent of the total crash related injury cases involved motorcycles.

This story was produced under the Road Safety Journalism Fellowship carried out by Vera Files and the World Health Organization under the Bloomberg Initiative for Global Road Safety.