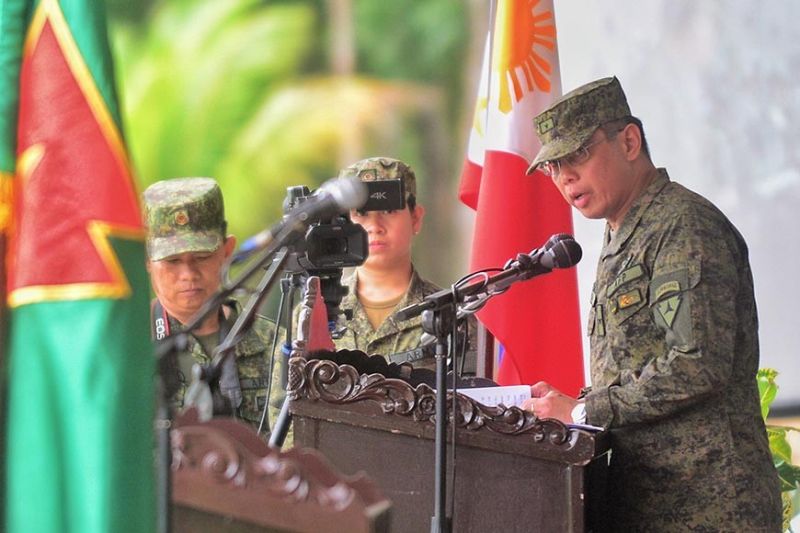 During the change of command and retirement ceremony, Brigadier General Eric Vinoya replaced Dolina as commander of the 3ID.

Vinoya, in his speech, said he will carry on with the programs of the division commanders before him and sustain the gains the 3ID has achieved, particularly the success of the government anti-insurgency drive, which aims to end local communist armed conflict in the region.

"The leadership's marching order is to fast-track the liberation of Region 6 (Western Visayas) from insurgency. I am determined to accomplish the mission given me using the full force of the Philippine Army and of the Armed Forces of the Philippines," Vinoya said.

He added that with the expected overwhelming support from the Spearhead troopers, partner-agencies, stakeholders, and the people of Central and Western Visayas, "the 3ID under my command will ensure the fulfillment of the people's will to totally eradicate the CPP-NPA (Communist Party of the Philippines-New People's Army) terrorist and other forms of violence and terrorism in the region for the people to enjoy a communist-terrorist-free and sustainable living community."

"I am here not only to address insurgency and defeat communist terrorist group in the region but also to develop a good working relationship with other stakeholders who vowed to work together to end the decades-long local communist armed conflict through the whole-of-nation approach," he said.

Vinoya is looking forward to working with different stakeholders on the journey toward the attainment of genuine peace and progress in Central and Western Visayas.

"I hope you will give the same support as we work hand-in-hand in achieving this aspiration," he said.

"I am calling on the leaders and members of the CPP-NPA terrorist to surrender now or suffer the full force of the Spearhead troopers. If you don't surrender, expect more combat encounters in the next few weeks as all military units in the AOR will be utilized to hunt you and hit you very hard," Vinoya said.

He said the rebels still have the chance to leave the armed movement and go back to the folds of law, "enjoying the true freedom and different government basic services together with their loved ones."

Vinoya is the commander of Joint Task Force Negros and assistant division commander of 3ID under Dolina. He is a member of the Philippine Military Academy "Hinirang" Class of 1987.