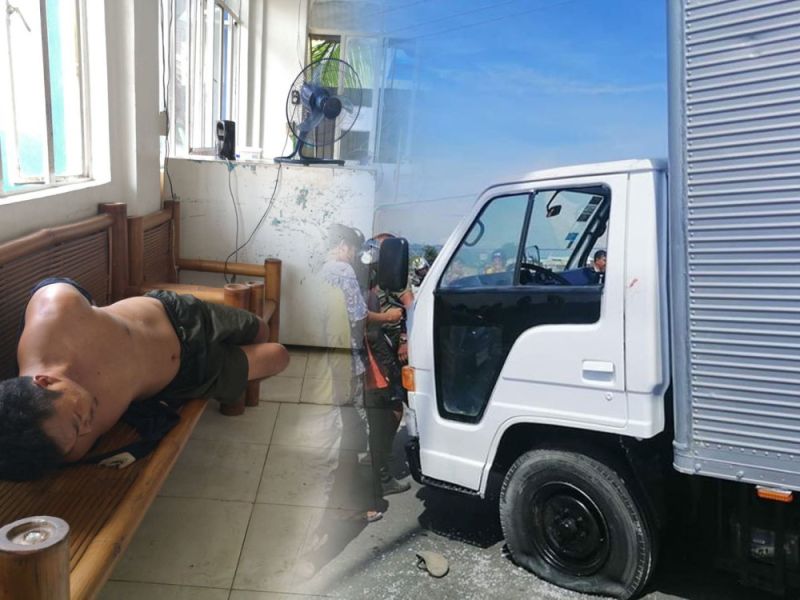 A CARNAPPER who attempted to escape on board a stolen vehicle was apprehended Tuesday morning, November 12.

The car chase between the car thief and authorities caused several injuries and triggered massive traffic in some parts of downtown area after the suspect counter-flowed.

Based on a police report, the suspect was identified as Carmelito Pamogas Tabion, 27, a resident of Old Market, Kalamansig, Sultan Kudarat.

His attempted escape resulted in the injury of four individuals, including a policeman.

Tambe said that around 9:30 a.m., while on his way home and upon reaching Leon Garcia St., he noticed that an Isuzu Elf Truck driven by the suspect was flagged down by Air Force personnel.

When the suspect was approached by an Air Force personnel, the truck sped off and bumped the vehicle of the Air Force, causing damage.

Despite being told to stop, the suspect continued to sped off to Boulevard area, prompting Tambe to chase it together with Air Force personnel.

The video, which circulated online, showed that the police officer tried to prevent the driver from inflicting further damage, as his driven vehicle was already swerving and out of control.

Tambe said even though he identified himself as a police officer, the suspect did not heed him. The suspect then bumped him. He was thrown toward the bumper of another vehicle.

The police officers were then radioed that there was a stolen Elf truck. A brief car chase ensued and the authorities cornered the suspect at Bolton Bridge.

In another video posted by Joseph Tacson, the suspect was only cornered when he reached Bolton Bridge but he continued to resist the arrest and became unruly.

The suspect locked himself inside to prevent the authorities from getting him. The officers were forced to break the window to arrest the carnapper.

Other officers also stabbed the tires of the delivery van to prevent the suspect from speeding off again.

Police reported that the owner of the stolen Elf truck, identified as Shuijin Hong, said the vehicle was parked at Sta. Ana Pier. However, while they were hauling products, the suspect suddenly drove off.

Tabion is currently detained at Sta. Ana Police Station while cases of violation of Republic Act 10883 (New Anti-Carnapping Law) and direct assault and damage to properties are being prepared against him.