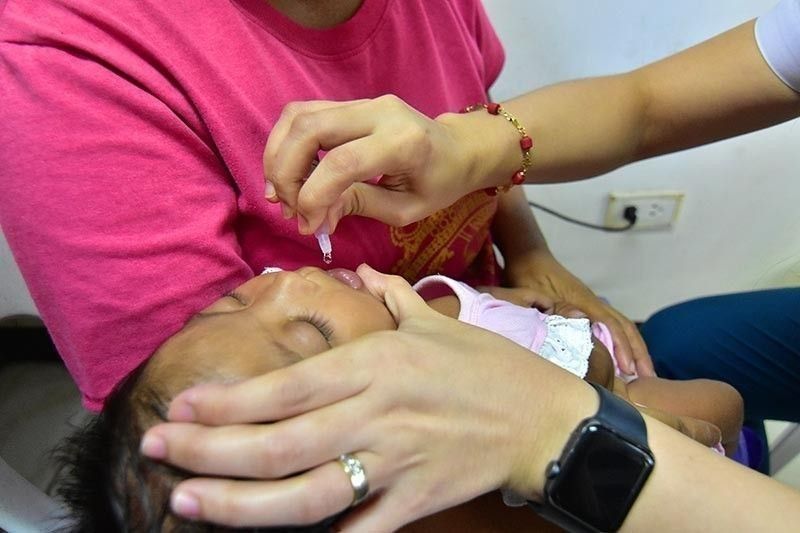 THE Department of Health (DOH) it targeting over three million children to benefit in the second round of the Mindanao-wide massive synchronized polio vaccination, which will start on November 25 to December 7.

Health Secretary Francisco Duque III said in a press conference Tuesday, November 12, that the Round 2 of Sabayang Patak Kontra Polio will cover all children five years old and below who will receive three doses of OPV and one dose of Inactivated Polio Vaccine (IPV) for them to be protected against poliovirus.

Duque said that during the kickoff of their massive campaign, which only covers the National Capital Region, Davao City, Davao del Sur, Marawi City, and Lanao del Sur last October 14 to 27, they were able to hit their target and reached the average performance, meaning the actual coverage of 96 percent of anti-polio vaccination. Thus, for the second round, they are aiming to sustain or surpass the coverage through the help of various stakeholders.

The DOH earlier reported the fourth polio case since an outbreak was declared in September. The test was conducted by the DOH's Research Institute for Tropical Medicine and the National Institute of Infectious Diseases. The victim is from Mindanao but was not specified where.

He said that as they roll out the Universal Health Care Law with Implementing Rules and Regulations (IRR) having been signed by Duque last October, he underscored the importance of immunization as a foundation to accelerate the eradication of vaccine-preventable diseases.

They are now conducting massive campaign to raise awareness to the public after the Davao City Health Office (CHO) confirmed that the poliovirus detected was from a water sample sourced from the Davao River near the Bolton Bridge area.

This report alarmed health officials as it poses risk to the children who are not yet immunized or have not yet completed their immunization against this crippling and fatal disease.

For his part, Health Assistant Secretary Abdullah Dumama Jr. narrated the challenges they encountered on the ground, which involved, among others, the terrain and the peace and order in the areas they covered. With this, he lauded the sacrifices and efforts of the health workers to make the campaign successful.

He also noted religion as one of the factors that other parents refuse to have their children vaccinated, as they said getting vaccination is against their religious beliefs.

Dumama said there is a P383-million budget allocated for the massive campaign and P13 million has been shelled out for Davao City and Davao del Sur alone.