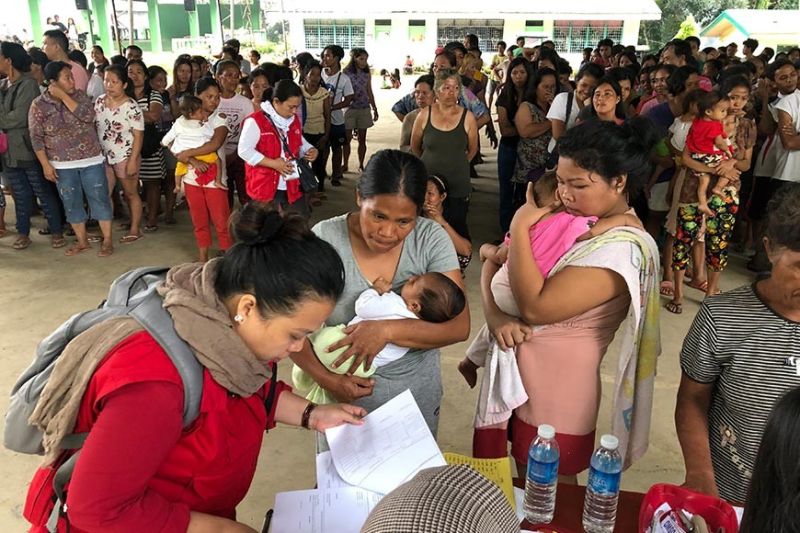 DAVAO. One of the health consultation activities for the evacuees. (Jeepy Compio)

THE Department of Health (DOH) in Davao said respiratory infection topped the health concerns of earthquake victims in various evacuation sites in the region.

Based on its situation report on the effects of magnitude 6.6 earthquake that hit Tulunan, North Cotabato, the DOH reported that as of November 10, a total of 52,728 families or 257,053 persons were affected by the earthquake in 317 barangays in Davao Region and Soccsksargen.

Of the affected families, 11,830 or 56,646 persons are taking temporary shelter in 78 evacuation centers. Likewise, 9,110 families are currently staying with their relatives and/or friends.

At the evacuation sites, DOH Assistant Secretary Abdullah Dumama Jr., during a press conference Tuesday, November 12, at Waterfront Insular Hotel, said following the strong earthquakes, they have assigned several teams to conduct health consultations to 8,102 evacuees to check on their health status.

Rosemary Gonida, 34, mother of two, one of the many displaced earthquake victims temporarily living in makeshift houses in Barangay Balnate, Magsaysay, Davao del Sur, said most of the children in the evacuation site experienced colds and high fever.

Gonida and over a hundred families take shelter in makeshift tents covered by thin tarpaulins.

"Hastang inita gyud sir inig adlaw. Bugnaw pud kaayo inig gabii. Pag muulan sir, magtulo-tulo gyud sa sulod. Maong daghan kaayo mga bata nga nangasakit (It's very hot sir especially during daytime. But at night, we also suffer extreme cold. Worse is when it rains as water will come inside the tents, that is why a lot of us here, especially children, got sick)," she said.

In Soccsksargen, a total of 7,068 consultations were conducted in 49 evacuation centers in North Cotabato. Topping the list is upper respiratory tract infection with 4,157 or 58.8 percent; hypertension at 1,580 or 22.4; headache at 628 or 8.9 percent; systemic viral infection at 215 or 3 percent; and acute gastroenteritis at 193 or 2.7 percent.

Dumama said there are also five suspected measles cases in evacuation centers, but they are still validating the report. But so far, they have not reported any cases of dengue in the affected areas.

"I have already instructed the regional director to make sure that measles cases will be investigated and be treated. We have also already 10 emergency management services teams there to assess everything especially dengue situation," Dumama added.

Base on the action taken in Davao, a conference on Rapid Assessment Results was conducted and it was headed by the DOH and Unicef. The Southern Philippines Medical Centre (SPMC) medical and dental teams together with the National Commission on Indigenous Peoples (NCIP), Office of the President also conducted outreach program in Bacungan, Magsaysay, Davao del Sur.

Mental health and psychosocial support were provided to 1,140 individuals from November 5 to 8. One was referred for further assessment and evaluation.

They had also deployed engineers in affected areas to assist in the assessment of damage and structural integrity of health facilities and organized Regional Nutritional Cluster Meeting led by National Nutrition Council in Davao Region (NNC-Davao) as well as continuous coordination with local government units through Provincial Health Office (PHO) and other health partners.

For Soccsksargen, the NNC conducted an assessment of the nutritional status of internally displaced persons inside the evacuation centers. They also treated and consulted 2,529 individuals from different evacuation centers in the municipalities of Tulunan, Kidapawan, Magpet, and Makilala.