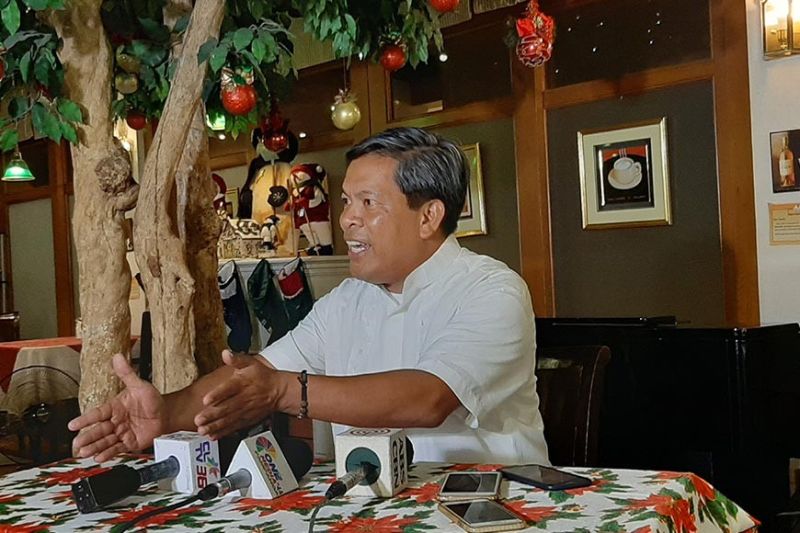 Fr. Fernando Suarez, famous for his healing powers, shares to local mediamen his side of story regarding the alleged apprehension of some bishops on his holding of healing masses in their respective ecclesiastical jurisdictions. (Princess Clea Arcellaz)

CITY OF SAN FERNANDO -- “Healing priest” Fr. Fernando Suarez over the weekend appealed to some members of the Catholic Bishops Conference of the Philippines (CBCP) to hold a dialogue amid the controversies hurled at him.

Earlier this month, Suarez made the news after he was allegedly barred from conducting his healing masses in Malaybalay, Bukidnon due to alleged lack of necessary permits.

Suarez, however, said that he had and has always had a “celebret” coming from India where his official congregation is currently based.

A “celebret” is an official document in the Roman Catholic Church given by a bishop or religious superior to a priest to serve as proof that he is permitted to say mass in another diocese outside of his ecclesiastical jurisdiction.

While Fr. Biven Belderol, the parish priest of Nuestra Señora Del Pilar Parish in Quezon, Bukidnon who invited Suarez to conduct his healing mass also took responsibility for the incident. Malaybalay, Bukidnon Bishop Jose Cabantan allegedly still issued a memorandum on October 7 “urging clergy and lay people to be vigilant and cautious about Suarez and his group.”

Cabantan is only among the several bishops in the country who banned Suarez from conducting his healing masses due to alleged “unknown reasons.”

According to Suarez, he has long been asking for a dialogue with the bishops, whom he did not formally identify, through a formal letter sent to CBCP to finally address the years-long wrangle between them.

“I have been sending them official letters addressed to CBCP to finally discuss and hopefully settle their concerns against me, but their only response was ‘noted’ and it never prospered from there,” he said.

The 52-year-old priest also belied the news circulating regarding alleged complaints filed against him at the Vatican, as well as criminal charges filed in Philippine courts.

“I personally went to Vatican to verify the alleged cases against me there, or even in the courts here but there was none. Besides, is there a respondent who does not know that he has a pending case?” Suarez said.

Suarez claimed that he is now a subject of trial by publicity and fear-mongering due to the alleged continuous defamation of the said bishops which were allegedly even published online through CBCP’s official newsletter.

“If I have violated any rules, I believe that the proper course is to discuss this within ourselves first. We are all priest and we have the same ministry of bringing the Lord closer to the people but they have resorted to fear-mongering and trial by publicity,” he said.

Despite the issues, Suarez said he will continue to share his healing gift and help the sickly people who believe in and seek his ministry.

“I am doing this for the people, not for anybody else. I was given this gift of helping the people and I will continue to share it as long as they want me to,” he said.