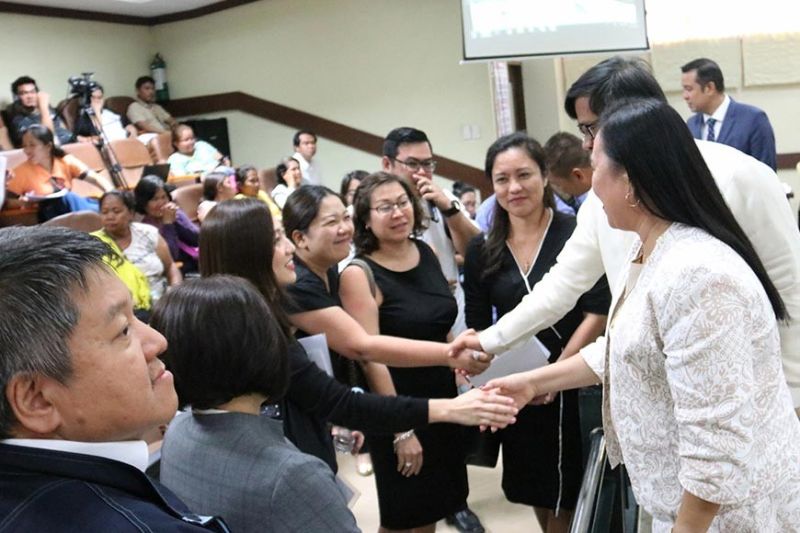 A 16,000-SEATER convention center, a one-hectare park and several wide roads will be part of the development of the consortium of SM Prime Holdings Inc. and Ayala Land Inc. at the South Road Properties (SRP).

Consortium officials appeared before the Cebu City Council Tuesday, Nov. 12, 2019, to share details of the planned development at its 26-hectare SRP property. They were there on invitation of the Council.

One of the highlights of the consortium’s presentation was the projected P22 billion that the project would contribute to the Cebu City Government in the next 15 years.

Of the P310 billion total development budget of the consortium, P22 billion will go to the City as payment for permits, taxes and other regulatory fees, Jeanette Japzon, Ayala-subsidiary Cebu Holdings Inc. corporate communications manager, said.

The full development of the property will be attained by 2035.

In the whole development, Japzon said, 70 percent will be for commercial development and 30 percent for residential. Japzon said the project will generate around two million direct and indirect jobs once completed, with 480,000 jobs to come from business process outsourcing companies that will rise in the area. The remaining number will come from indirect jobs such as those in hotels, residential and other business establishments set to rise in the property, she added.

With the approval of the land development permit by the Cebu City Council last Nov. 5, the consortium will now proceed with the horizontal development.

Russel Sy, SM Prime commercial properties group vice president, said they will start horizontal development in the first quarter of 2020. These would include the drainage system, construction of access roads and installation of underground power lines.

After the preparation of the land, which is expected to be completed in the second quarter of the same year, Sy said they will then proceed with site development, including the construction of the convention center and the linear park.

A linear park, usually found in cities, is considerably longer than it is wide. The planned one-hectare linear park will be 320 meters long and 36 meters wide, and will lie at the center of the development, providing a “generous open space” to residents, Japzon said.

The project will provide five-meter wide sidewalks to encourage the public to walk around the property. The park alone will show that the development will promote “green spaces.”

The road networks are also designed to be 40 meters wide and 24 meters wide. Japzon didn’t say how many lanes, but the standard lane width is 3.7 meters.

As to the convention center, Japzon said big crowds could be accommodated there. “Cebu City can host big concerts like what Manila is capable of,” she said. It can also be a great venue for sports events, she added.

Sy said the convention center and park would be completed in the third quarter of 2023. The rest of the components of the development will depend on the demand of the market, he said. He explained that they will only start to construct a new structure once the certain property will be 70 percent sold.

Questions of the councilors focused on the water supply, waste management, hiring priorities and traffic management.

Japzon said they will get water supply from Pilipinas Water Resources Inc. (PWRI). City Councilor Joy Augustus Young then moved to have an executive session with PWRI officials to ask where they will get the water they will supply to the SRP. Association of Barangay Councils president and Councilor Franklyn Ong also raised the concern that the project should have its own material recovery facility as part of its solid waste management plan.

Councilors Alvin Dizon and Raymond Alvin Garcia wanted to make sure the consortium will prioritize hiring residents from Cebu City. In 2015, the Council approved an ordinance that would require contractors to hire qualified citizens in the barangay where the project is located.

Considering the other developments at the SRP, especially with the start of the Cebu-Cordova Link Expressway in 2021, SRP manager Jose Daluz III said they have created a technical working group to oversee traffic plans in the area. The technical working group is composed of representatives of the SM-Ayala consortium, Bus Rapid Transit, Universal Hotels and Resorts Inc. and the Talisay City Government.

While the venue for the consortium’s presentation was dubbed by the Council as “Citizens’ Hour,” there was no question from the audience. While those from civic groups were invited, only those from the consortium were present.

The ordinance was submitted to DBM 7 for review last Sept. 17. Seven opposition councilors led by Councilor Nestor Archival had asked that the DBM disapprove it.