Leonardia to speak at World Summit of Leaders in South Africa 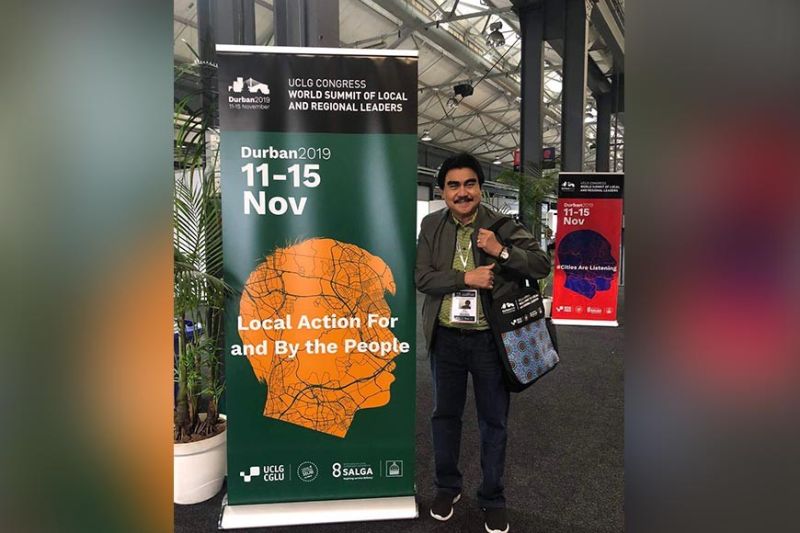 WORLD SUMMIT. League of Cities of the Philippines (LCP) president and Bacolod City Mayor Evelio Leonardia, who represented the Philippines, will speak at the ongoing World Summit of Local and Regional Leaders, convened by UCLG, in Durban, South Africa. (Contributed photo)

AS NATIONAL president of the League of Cities of the Philippines (LCP), Bacolod City Mayor Evelio Leonardia is representing the Philippines at the World Summit of Local and Regional Leaders, convened by the United Cities and Local Governments (UCLG), in Durban, South Africa from November 11 to 15.

The World Summit is the largest gathering of mayors, presidents of associations, councilors, and local and regional practitioners from around the world.

Leonardia, who has also recently been appointed by President Rodrigo Duterte to the Legislative Executive Development Advisory Council [LEDAC] as the lone representative of all local governments in the country in the council, will also speak at the World Summit at the CEO Forum on Local Government Associations to share his insights on issues besetting Philippine cities today.

These include, specifically, in the areas of disaster risk management, sustainable development, and managing the impacts of climate change. He will also meet potential partners to support the efforts of Philippine cities on sustainable urban development.

Leonardia will also touch base with various institutional partners such as the World Bank, Cities Alliance, and UN Environment, which previously supported capacity-building programs for Philippine cities in the hope of renewing ties with these institutions.

The summit also gathers the most influential local and regional leaders, councilors, local governments, partners, and actors involved in the decision-making of city and community life.

Several topics will be discussed in the Summit, although special attention will be given to strengthening democracy, the implementation of the right to the city, and the development of an intergenerational agenda to create a shared vision of a better society.

Building on the centenary-old international movement of municipalities, the World Summit experience will include interactive and innovative formats built on four tracks that will guide participants, together with dedicated sessions for UCLG membership.

Leonardia’s participation in the World Assembly is aimed at securing a seat in the World Council for the LCP. It is a strategic move on the part of the League. A place in the World Council will increase international visibility for the association, which can support global knowledge-sharing exchanges that Philippine cities support.

Leonardia is a sponsored delegate of the Asia Pacific section of UCLG, which means that no resources from the City Government of Bacolod were used to fund his participation in this Summit. (PR)