Most distant world ever explored gets new name: Arrokoth 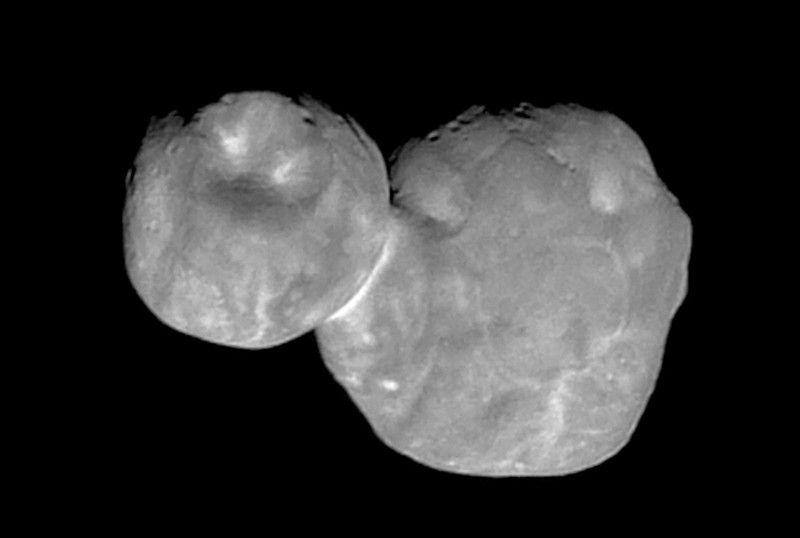 FLORIDA. This January 1 image made available by NASA shows the Kuiper belt object originally called "Ultima Thule," about 1 billion miles beyond Pluto, encountered by the New Horizons spacecraft. On Tuesday, November 12, NASA announced its official name "Arrokoth" which means "sky" in the language of the Native American Powhatan people. (AP)

CAPE CANAVERAL, Florida -- The most distant world ever explored 4 billion miles away finally has an official name: Arrokoth.

That means "sky" in the language of the Native American Powhatan people, the National Aeronautics and Space Administration (NASA) said Tuesday, November 13.

NASA's New Horizons spacecraft flew past the snowman-shaped Arrokoth on New Year's Day, 3 and a half years after exploring Pluto. At the time, this small icy world 1 billion miles or 1.6 billion kilometers beyond Pluto was nicknamed Ultima Thule given its vast distance from us.

"The name 'Arrokoth' reflects the inspiration of looking to the skies," lead scientist Alan Stern of Southwest Research Institute said in a statement, "and wondering about the stars and worlds beyond our own."

The name was picked because of the Powhatan's ties to the Chesapeake Bay region.

New Horizons is operated from Johns Hopkins University's Applied Physics Lab in Laurel, Maryland. The Hubble Space Telescope -- which discovered Arrokoth in 2014 -- has its science operations in Baltimore.

The New Horizons team got consent for the name from Powhatan Tribal elders and representatives, according to NASA. The International Astronomical Union and its Minor Planet Center approved the choice.

Arrokoth is among countless objects in the so-called Kuiper Belt, or vast Twilight Zone beyond the orbit of Neptune. New Horizons will observe some of these objects from afar as it makes its way deeper into space. (AP)