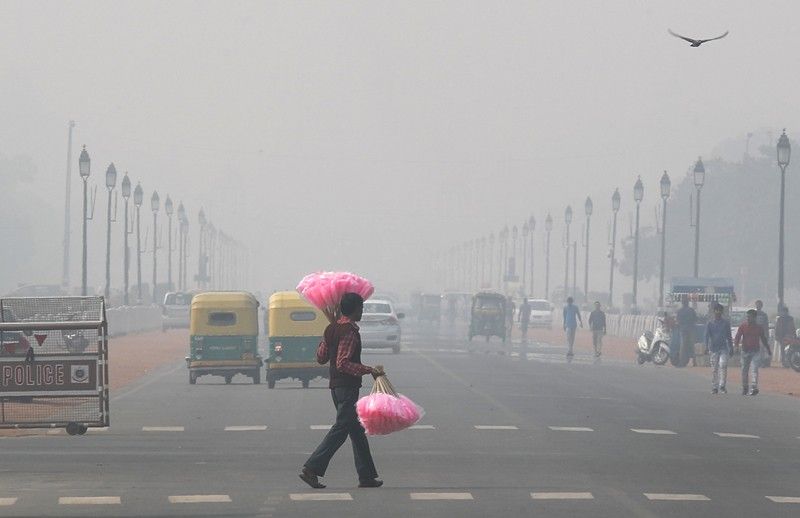 INDIA. A sweet candy vendor walks amidst thick layer of smog as he looks for customers in New Delhi, India, Tuesday, November 12. A thick haze of polluted air is hanging over India's capital, with authorities trying to tackle the problem by sprinkling water to settle dust and banning some construction. The air quality index exceeded 400, about eight times the recommended maximum. (AP)

NEW DELHI -- A thick gray haze blanketed India's capital on Tuesday, November 14, with authorities attempting to reduce the pollution by sprinkling water to settle dust and banning some construction.

The air quality index exceeded 400, considered "severe" and about eight times the recommended maximum, according to the state-run Central Pollution Control Board.

Buildings and monuments in New Delhi were largely obscured by the haze and residents complained of health effects.

"We can't breathe properly. My eyes are burning," said Urmila Devi, who lives in Ghaziabad, one of the capital's most polluted areas.

Favorable winds had briefly halved the level of pollutants, but winds blowing from the northwest carried air-borne particles from burning crops in Punjab and Haryana states to New Delhi, leading again to high levels of pollution, according to the government's air quality monitoring system, SAFAR.

Air pollution in northern India peaks in the winter due to smoke from agricultural fires. Farmers said they are unfairly criticized and have no choice but to burn stubble to prepare their fields for the next crop.

Rising pollution levels have also irked foreign visitors, with some saying they plan to cut short their trips because of health concerns.

"We are in the capital of India. The government should put more effort into tackling this problem," said Rijil Odamvalappil of Abu Dhabi, who was visiting New Delhi with his wife.

Some residents said the pollution is so bad that it should be the most important issue for the government.

Pollution controls have been imposed, such as sprinkling water from high-rises and banning some construction to settle or avoid dust, but the capital's poor air quality has continued amid calls for the government to do more to address the root causes.

Restrictions on private vehicles meant to reduce emissions were relaxed on Monday and Tuesday for the 550th anniversary of the birth of Guru Nanak, the founder of the Sikh religion.

Doctors in the city of 20 million people said many of their patients are complaining of ailments related to the filthy air they breathe.

New Delhi's chief minister, Arvind Kejriwal, has made fervent appeals on Twitter and in newspaper advertisements for residents to help tackle the pollution problem.

India's top court last week asked the city government, its neighboring states and the federal government to work together to improve air quality.