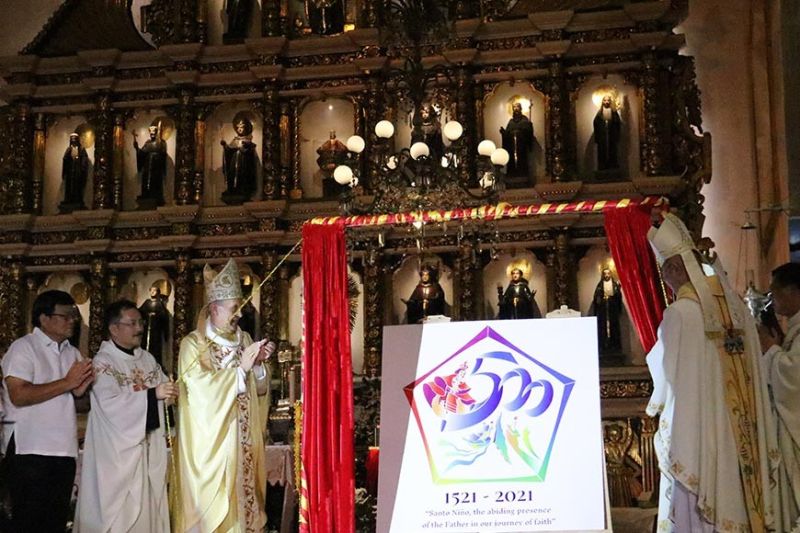 OFFICIAL LOGO: Papal Nuncio Gabriele Giordano Caccia (third from left) and Cebu Archbishop Jose Palma (right) unveil the official logo of the quincentennial of the arrival of the Holy Image of the Sto. Niño in Cebu at the Basilica Minore del Sto. Niño on Wednesday, Nov. 13, 2019. The logo was designed by Ramesh Rosillo, a graphic artist based in Cebu. (Photo by Amper Campaña)

THE Roman Catholic Church officials asked the faithful to participate in celebrating the quincentennial anniversary of Christianity in the Philippines in 2021, saying it is an opportunity for them to strengthen their spirituality.

The faithful can take part in several events, including the Parish/Archdiocesan Mission Congress, Pilgrimage of the Jubilee Cross, monthly jubilees, Triduum celebrations and the National Mission Congress.

They can also watch the painting exhibit of the late great Filipino painter Fernando Amorsolo and join in the commemoration of the first baptism’s 500th anniversary.

Fr. Mhar Balili, secretary general of the National Mission Congress, said to prepare the Cebuano faithful for the year-long quincentennial celebration, the Parish Mission Congress and the Archdiocesan Mission Congress will happen from August to October in 2020. During these two congress, the history of Christianity’s foundation in Cebu will be taught to the youth and adult.

Meanwhile, starting on Dec. 1, 2019, a replica of Magellan’s Cross made of tindalo wood will visit different parishes in Cebu.

It is also scheduled to tour parishes, dioceses, archdioceses, prelatures and military ordinariates in the Philippines.

Ferdinand Magellan was a Portuguese explorer who sailed under the Spanish Empire’s banner. In 1521, the fleet of ships led by Magellan reached an archipelago, which was then populated by a multitude of tribes led by their respective chieftains.

On April 14, 1521, the Spaniards succeeded in converting Cebu’s Rajah Humabon, his wife and subjects to Catholicism.

To achieve an inclusive celebration, a series of activities involving church organizations, ministries and different sectors of the society would be held in the run-up to the quincentennial celebration. The participants will come from the sectors of youth, environment, media and artist, among others.

The Triduum mass will be on April 11-13, 2021, before the quincentennial anniversary’s main date—April 14.

A sendoff ceremony for 500 missionaries is scheduled during the National Mission Congress on April 12-16.

Amorsolo’s painting, “The First Baptism in the Philippines,” is to be shown on April 11-18. The artwork inspired the logo of the fifth centenary.

On April 14, a reenactment of the first baptism in Cebu will happen. The baptism of 500 children with special needs will follow the event.

Though there is no assurance of Pope Francis’s attendance during the main event in 2021, the Catholic Bishops Conference of the Philippines (CBCP) has promised to update him about the activities.

“We sensed that his schedule is so filled... Having considered that he had already came in the Philippines, we think it is not that charitable for us to really insist,” Archbishop Romulo Valles, CBCP President told members of the media on Wednesday, Nov. 13, 2019.

The pontiff visited the country in January 2015. He held mass in Tacloban City, Leyte, which was among the places devastated by Typhoon Yolanda in 2013.

Valles said: “However, surely, we will formally communicate with him, informing him that we will have such a beautiful celebration in the country and (say to him) that ‘we would love to have your presence. However, knowing your difficult schedule, we would like to have your presence by having a papal legate.’”

A papal legate or apostolic legate is a cleric sent on a mission, ecclesiastical or diplomatic, by the pope as his personal representative, according to britannica.com.

Meanwhile, Balili said a coffee-table book is set to be published to commemorate the founding of Christianity.

Kenneth Cobonpue, head of the Visayas Quincentennial Committee, said there is also a plan to establish a heritage walk in time for the celebration. The heritage walk, based on the committee’s initial plan, will start at Fort San Pedro and proceed to Malacañang sa Sugbo, Gotiaco Building, Cebu City Hall, Basilica Minore del Sto. Niño, Cathedral Museum, Plaza Humabon, Colon Obelisk, Heritage of Cebu Monument in Parian and Yap-San Diego Ancestral House. It will end at Casa Gorordo.