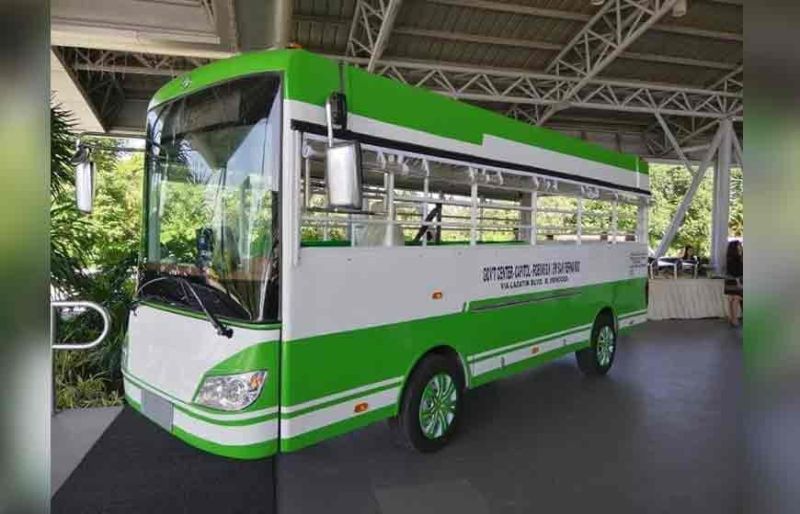 E-JEEPNEYS. The actual e-jeep that will soon ply the roads of City of San Fernando was recently displayed at the LausGroup Event Centre for public viewing. (CLTV36 photo)

CITY OF SAN FERNANDO -- Electric jeepneys (e-jeeps) will soon be transporting Kapampangans around this capital city as the Land Transportation and Regulatory Board (LTFRB) granted the provisional authority to ten modern public utility vehicles (PUVs).

This was gleaned during the launch and public viewing caravan of the e-jeeps at the LausGroup Event Centre recently.

The base fare will be P11 for the first four kilometers and an additional P1.80 for every succeeding kilometer.

Aside from its zero-emmission components, the e-jeeps are also equipped with Wi-fi, dashcam, closed-circuit television (CCTV) and global positioning system (GPS), making them compliant to the Omnibus Franchising Guidelines (OFG) and Philippine National Standards for PUV modernization.

Department of Transportation Secretary Arthur Tugade, in his message, said that the granting of provisional authority to the said E-jeeps is part of the national government's PUV modernization program which aims to provide comfort, convenience and security to both driver and passengers.

"The modernization is good not only to the drivers or operators but also to the riding public. Because the target of the modernization program is making sure that our riding public will commute and travel in ease, comfort, and convenience. This is good for the environment and to the nation,” Tugade said.