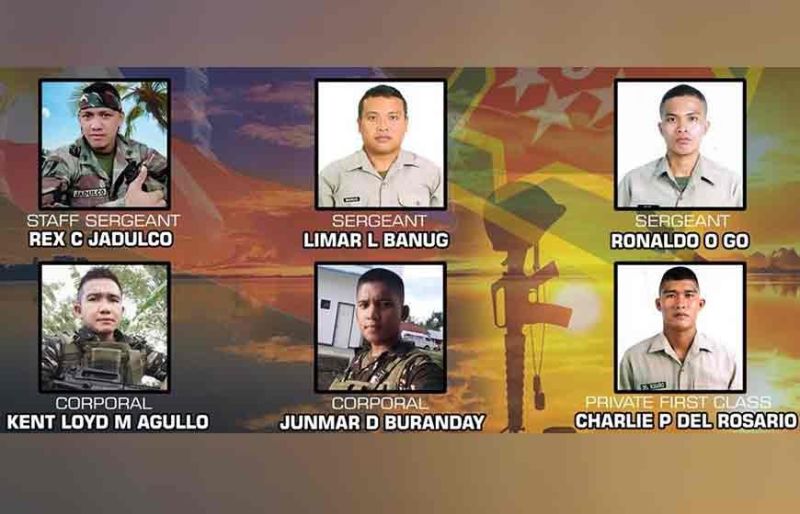 THE Philippine Army has officially identified the six fallen soldiers in the November 11 encounter with the New People's Army (NPA) in Borongan City, Eastern Samar.

Their remains are now at the 8th Infantry Division in Camp Lukban, Catbalogan City, Samar for funeral services. President Rodrigo Duterte is expected to visit Catbalogan City on Friday, November 15, to condole with the fallen soldiers' families.

Diñoso, along with the local officials, condemned the "treacherous attack."

Aragones said the soldiers were conducting military operations following reports about the NPA presence in Sitio Bangon, Barangay Pinanag-an, Borongan City when they encountered about 50 rebels.

"While the troops were on their way to their rebels' lair, which is also being used as a bomb-making facility, they encountered the NPA terrorists who employed several improvised anti-personnel mines," he said.

The Army accused the NPA of violating the Comprehensive Agreement on Respect for Human Rights and International Humanitarian Law (Carhrihl) when they used landmines during the attack.

The "Ottawa Convention" or "Mine Ban Treaty" seeks to end the use of Anti-personnel Landmines (APLs) worldwide to end suffering and casualties, the Army said.

"We commit to run after the perpetrators of this treacherous affront on our troops out to protect our peoples' democratic way of life and make those criminals pay for their actions," said Marine Brigadier General Edgard Arevalo, spokesperson of the Armed Forces of the Philippines.

"We will press on with our pursuit to eliminate the CTG (communist terrorist group before the end of the Duterte administration. This cowardly attack by these enemies of peace and development hardly establishes any point of strength. But rather a weakness in attacking through anti-personnel mines soldiers out to aid our people needing help," the Army official said in a statement.

Eastern Visayas, particularly the Samar Island, remained a hotbed of insurgency with the continued presence of NPA, which has been listed as a terrorist organization by the United States, Australia, Canada, New Zealand, European Union, and the United Kingdom. (SunStar Philippines)