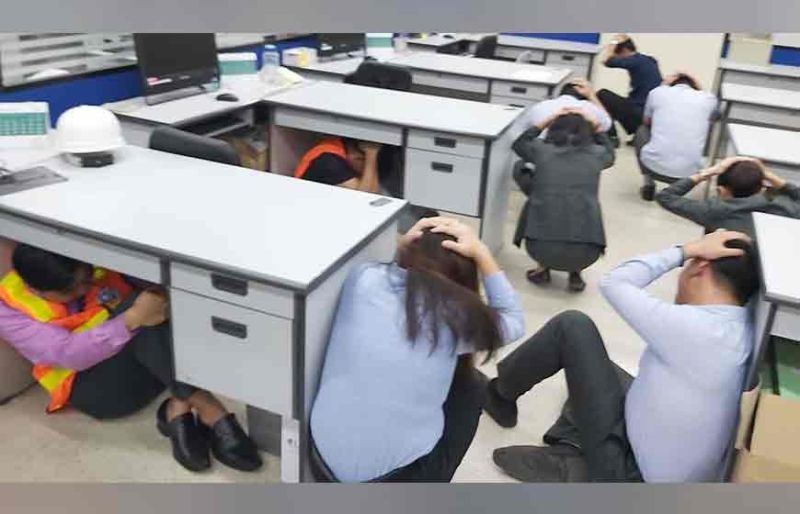 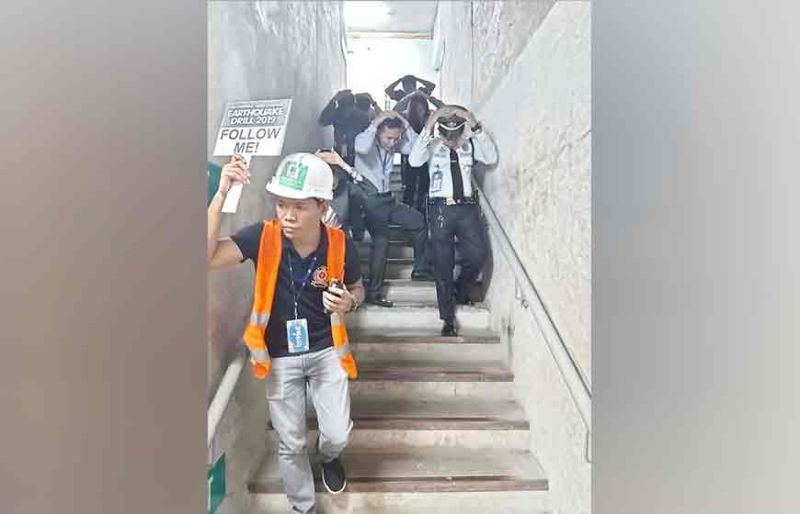 SM emergency response team members put out a “fire,” one of the scenarios at the NSED. (Contributed photo) 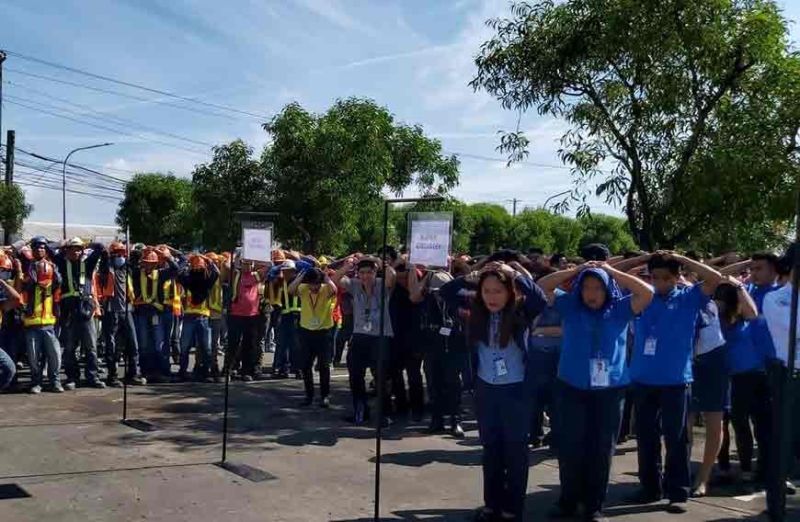 Gathering at the Command Center, a distance away from the mall. Two command centers were set up, one each for the north and south wings. (Contributed photo) 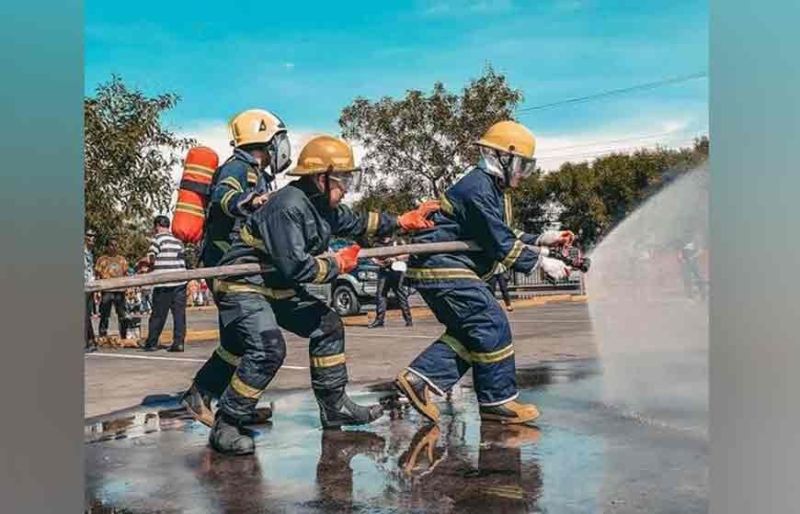 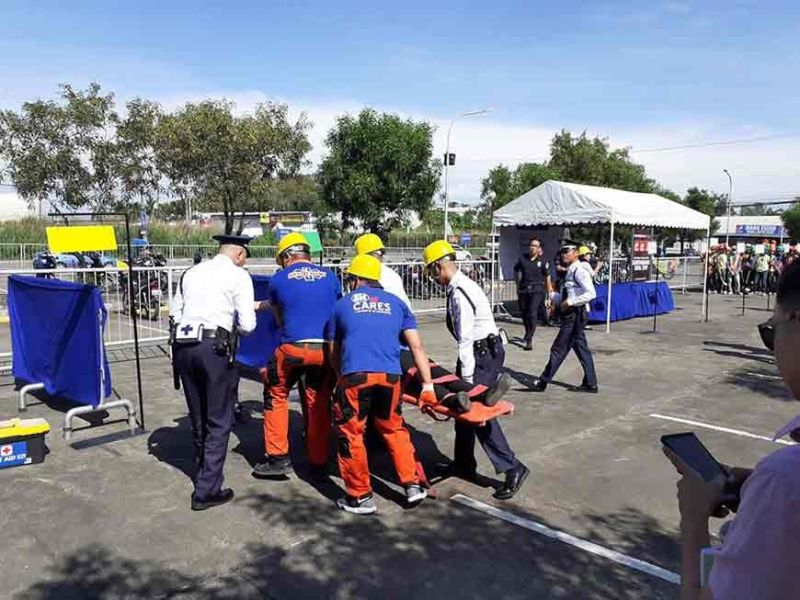 Search and rescue team brings the injured to the medical area. (Contributed photo) 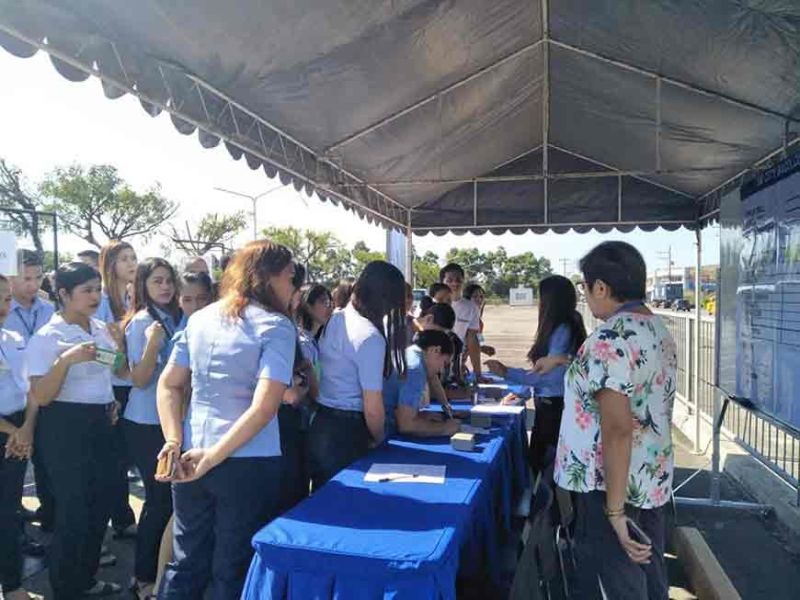 In a real earthquake scenario, evacuees are called and encouraged to log at the nearest command center for headcount and safety updates. (Contributed photo)

IN RESPONSE to the call of the national government to engage in an earthquake drill, SM Bacolod gathered around 500 people composed of their employees, tenants, construction workers, among others to carry on the last earthquake exercise they have set for this year.

This is in line with the National Simultaneous Earthquake Drill (NSED) being held quarterly for the third year now, wherein the national government calls on all its agencies and units and urges private sector participation in preparation for such situations.

All SM Supermalls, the country’s biggest mall network, and its properties under the SM group have given their full support to the regular earthquake preparedness drill.

“Aside from individually being reminded of what to do during an earthquake, this national drill is also an opportunity for our own SM Emergency Response Team to put to practice their learnings from regular trainings,” said May Castro, public relations manager of the mall. The mall’s 4th quarter exercise was headed by assistant mall manager Julia Javellana as the incident commander.

Observing the drill proceedings were officials and teams from the Bacolod City Disaster Risk Reduction and Management Office and the Bureau of Fire.

In the simulated scenario, an earthquake started at 9 a.m. and evacuation of employees, tenants, agency personnel, construction workers, and early customers was completed at 9:04 a.m. Overall, the exercise from search and rescue to simulated fire-fighting lasted until 9:20 a.m.

The DRRMO and the BFP also reminded all on what to do when an earthquake strikes. All should try to remember the Duck-Cover-Hold. When an earthquake is felt, the safety procedure is to duck under a sturdy desk or table, or against a solid wall, while staying away from windows, movable cabinets and other objects that could fall. One should stay under cover until the shaking stops; hold onto the desk or table and protect your head with your arms. For those outside, it is advised to move to a clear area, away from buildings, electrical wires or poles.

This drill was also participated by local government units, businesses, schools and other institutions in support of the national government’s earthquake response plan.

“SM is fully supportive of this call by the government because we believe that we have the best chance of surviving calamities and disasters through preparation, proper coordination, and practice,” said Castro adding that, “Through regular practice of evacuation procedures, we are also in a better position to assist our customers and direct them to identified safety areas should such events happen.”