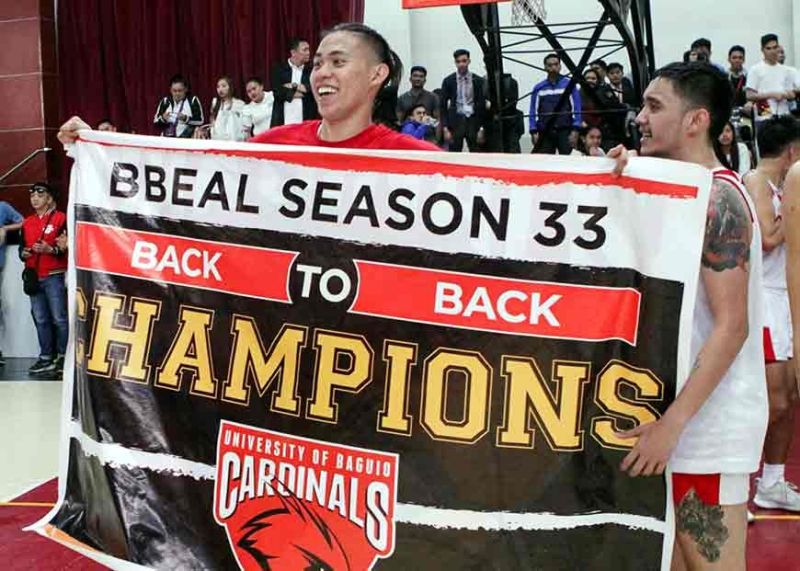 WOOED. University of Baguio Cardinals Efren dela Cruz lifts the championship banner after toppling University of the Cordilleras Jaguars in their championship match. Dela Cruz, together with four other Cardinals are reportedly being wooed to play in Manila. (Photo by Jean Nicole Cortes)

FOR the University of Baguio (UB) Cardinals, winning the men’s basketball championship is not new to them having won 26 out of the 33 seasons of the Baguio – Benguet Educational Athletic League.

And winning means equipping the team with the right players determined to achieve the goal.

The Cardinals routed the University of the Cordilleras (UC), 92-51, and retained its men’s basketball title Wednesday, November 13, in the most lopsided victory in the 33 years of the league with nine teams competing in this year’s tournament.

UB had a twice to beat advantage going to the finals by sweeping the elimination round and it awaited the winner of the step ladder post eliminations with the second-seeded UC as the victor last Monday against Cordillera Career Development College (CCDC).

The fourth-ranked CCDC blasted third seed Baguio College of Technology (BCT), 97-79, in the first of the step ladder matches. But against CCDC, the La Trinidad, Benguet school came in short 99-75.

“This is a much different team from last year when we underestimated Saint Louis University (SLU),” added Flores, whose wards broke the Jaguars early and from there, cruised to the win with plenty of time.

Flores knew this season is a whole different BBEAL as they expect a tough field having seen CCDC, SLU, UC and BCT beefing - up their line-up.

But after winning the school’s 26th title, Flores said the key is keeping the team intact for next year.

Others who are being wooed in Manila are sweet shooting Clyde Camit, Efren Dela Cruz and Vhince Sibbaluca.

UB advances to the Philippine Collegiate Champions League in January, said Flores, where they will play Cordillera Higher Education Schools and Athletic Association champion, University of Luzon, and Pampanga schools.