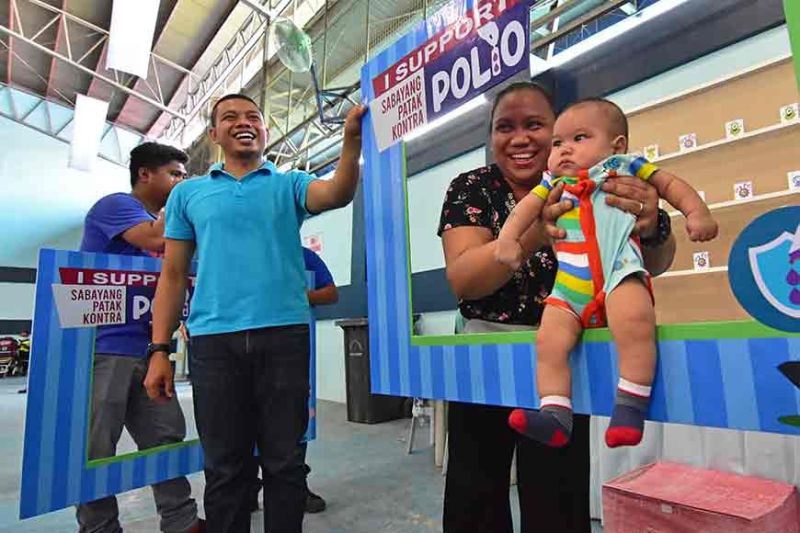 DAVAO City must retain its above 95-percent immunization coverage in the remaining two rounds of the citywide polio mass vaccination, the City Health Office (CHO) said.

CHO technical division chief Julinda Acosta said the first round of the Sabayang Patak Kontra Polio, conducted last October 14 to 27, reached a 99.48-percent immunization coverage or a total of 185,901 children ages zero to 59 months old, which is the target age group for the vaccination of the oral polio vaccine type 2 (OPV2).

Based on 2019 data of the Philippine Statistics Authority, there are a total number of 186,864 children belonging to the targeted age group.

But Acosta said the remaining rounds of the Sabayang Patak, which is on November 25 to December 7 for the second batch, and on January 6 to 18 next year for the third batch, must have a sustained targeted percentage.

Sabayang Patak, a mass immunization program organized in partnership of CHO, the Department of Health (DOH)-Davao, and the World Health Organization (WHO), is a simultaneous vaccination program in all barangay health centers, and selected hospitals, churches, and schools. The program also covers house-to-house immunization, particularly in far-flung areas.

This program was implemented after DOH declared a polio outbreak since sample of the polio type 2 virus was traced in Davao River near the Bolton Bridge.

Acosta previously said that having a 95 percent immunization already guarantees the protection of the children from the possible virus infection.

But she said parents must have their children take the remaining booster in the following rounds, as it would guarantee further protection against the virus, which causes deformity and death to children.

At present, the DOH has confirmed four polio cases in the country, since the outbreak was declared in September.

Acosta said surveillance is also being conducted to monitor children near the Davao River for possible symptoms of polio.

DOH currently has not received any report of suspected child with polio.

But Acosta said, there is a need to monitor the movement of the virus since it can be easily transmitted.

"Davao City is highly vulnerable to disease transmission, because we are being considered as one of the strategic places in the Philippines. Many migrants are coming in here in Davao City, that is why we need to protect our children," Acosta said.

Meanwhile, she said the city's immunization rate has been lauded by WHO and United Nations Children's Fund (Unicef).

Acosta said the city's program against polio is currently serving as a "role model" to other provinces and municipalities in Mindanao.

"We are in close coordination in both public and private hospitals, to ensure that even the new-born will immediately be given vaccination. It is allowed since it is safe," she said.