Security preparations up for Pasko Fiesta 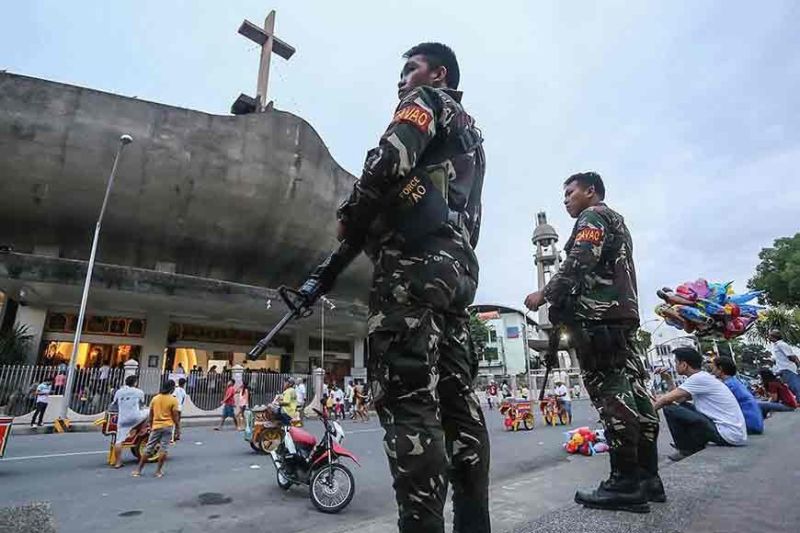 LOCAL authorities are now gearing up for the month-long Pasko Fiesta celebration, which will kick-off next week, November 22, and end on January 2, 2020, to ensure public safety.

Task Force Davao commander Colonel Consolito Yecla said they already have a security plan for the upcoming Christmas activity but they are just waiting for the Public Safety and Security Command Center, which will set the requirement on the deployment of personnel in each activity.

"So it is not just about deploying individuals to stand there watching for security concerns. We will be doing things that used to secure events, 'yong mga policies natin. The emphasis is on the concept of operations other than just deploying personnel to secure the big events," Yecla said.

He said they will deploy all their available personnel and will seek reinforcement from the higher headquarters if needed.

"But we have enough forces to cover the requirement of Davao City," he said.

Yecla said there is already an existing security matrix to cover the activities for Pasko Fiesta.

For her part, Davao City Police Office (DCPO) spokesperson Police Captain Rose Aguilar said they are just polishing now the security plan. Most likely, all the stations where the events will be held will be provided with maximum deployment.

She said DCPO Director Kirby John Kraft has come up with a plan to create a station-sized group that will focus on providing security coverage for Pasko Fiesta aside from the stations in the downtown area.

The Police Regional Office-Davao, meanwhile, expressed its full support to DCPO should they need more additional police force to augment the number of policemen to be deployed on the ground.

The annual Pasko Fiesta, organized by the City Government of Davao, is expected to gather thousands of visitors both locals and tourists alike. It features several activities including Pasko Fiesta 3D Wall Mapping, Pasko Fiesta Carnival, Lamdag Parada, and Torotot Festival, among others.