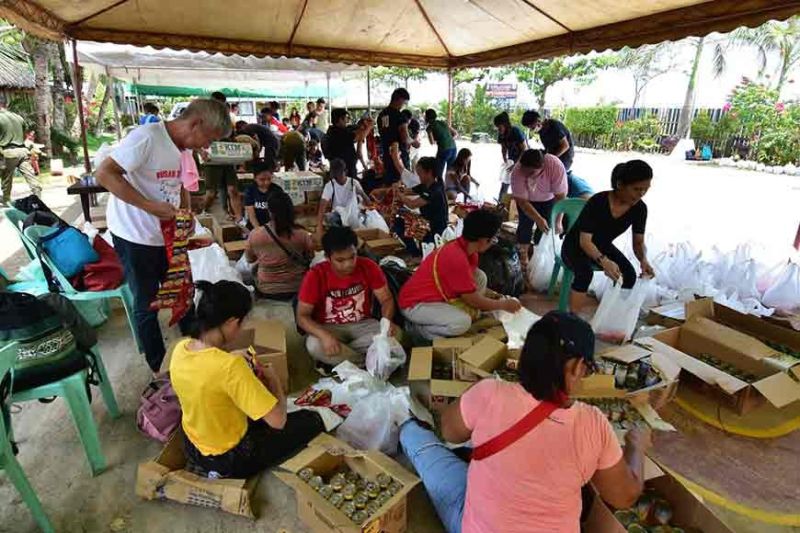 TASK Force Davao (TFD) has noted a decline in relief assistance for disaster-affected residents in Davao del Sur and North Cotabato, thus it is asking for more donations in preparation for possible "donor fatigue."

TFD commander Colonel Consolito Yecla said they are still accepting more donors in their headquarters, adding that there are already more than 19,000 food packs distributed to barangays where relief goods are most needed.

"The Oplan Tabang is based on voluntary donation of Dabawenyos, that's why we are calling for additional help ng Dabawenyos to continue pouring support kasi yong na-repack natin is probably, pag i-distribute natin yon ulit, is just one round," Yecla said.

Aside from relief goods, he encouraged the donation of construction materials such as nails, roof, wires, and tents, as some damaged schools are being replaced by makeshift classrooms to continue with classes.

The TFD is in constant coordination with the local government units in looking after the situation should there be a need for more relief assistance.

"Baka magkaroon ng donor fatigue in other areas, we should be ready. It's not good na while others are having their Christmas, yong mga victims ay nandoon pa sa evacuation center without medicines and other basic needs. It's more on the planning para ma-sustain natin dapat tuloy-tuloy tayo," he said.

He said donor fatigue has been experienced in African countries where people got tired from giving donations and they are anticipating that phenomenon.

During early days following the earthquake on October 31, they were receiving ample donations but as days passed by, the volume continues to drop, which is already one of the signs.

On Thursday, November 14, the Davao City Oplan "Tabang" team has distributed relief goods for 569 families affected by the series of earthquakes in Hagonoy Davao del Sur.

They gave 1,148 food packs ready to be distributed to the barangays of Aplaya, Balutakay, Guhing and Leling in Hagonoy, which were among the most affected barangays in the Municipality of Hagonoy. Each family would receive two food packs.

Aside from the food packs, rolls of tarp for tent, 40 pieces of mosquito net, 40 pieces of blanket, 20 pieces of cooking pots and eight sacks of assorted clothes were also loaded on trucks ready for donation.