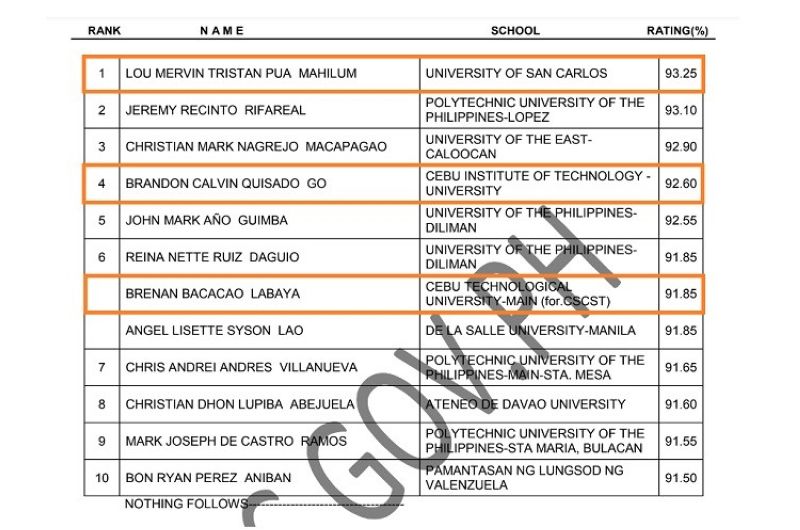 A UNIVERSITY of San Carlos (USC) graduate snagged the top spot of the Civil Engineer Licensure Examination given this November 2019. Two other Cebu graduates also made it to the top 10.

Lou Mervin Tristan Pua Mahilum of USC placed first in the examination with a rating of 93.25 percent.

Brandon Calvin Quisado Go of Cebu Institute of Technology-University placed fourth with a rating of 92.60 percent.

In sixth place is Brenan Bacacao Labaya of Cebu Technological University-Main with a rating of 91.85 percent.

Mahilum said he never expected to top the board exam and was shocked when he heard the news.

“I doubted myself during the exam. While waiting for the results, I was really nervous and started to think negatively,” said Mahilum.

During Mahilum’s six-month preparation for the board exam, he made sure to balance his time in studying and giving his body and mind some time to rest.

“Mental and physical health are very important, so I always made sure to balance my time in studying and rest, doing social media or hanging out with my friends,” said Mahilum.

While preparing for the examination, his biggest challenge was himself.

“I came to a point were I felt really tired and wanted to give up. The pressure was too much,” said Mahilum.

To ease the negative thoughts and pressure he was feeling, Mahilum made his family his inspiration to continue.

He said his family’s support made him stronger.

For now Mahilum plans to rest before scouting for companies where he could pursue his career as an engineer.

The Professional Regulation Commission announced that of the 15,075 who took the exam, only 6,510 passed. (JGS, RSR)