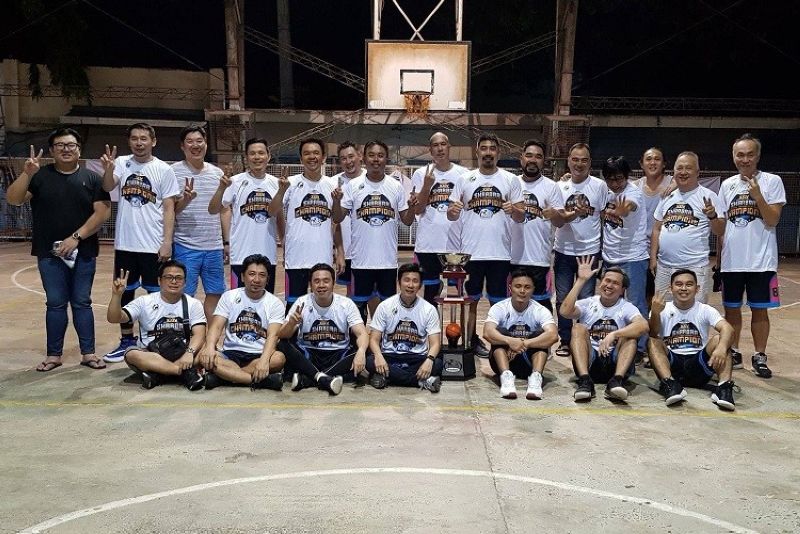 WINNER AGAIN. Members of the 1990-Bayfront Hotel, who hold the record for the longest undefeated streak in Shaabaa, celebrate after winning the Division A title. (Contributed photo)

THE 1990-Bayfront Hotel took over in the second half to put down the 1999-AutoLAB, 70-58, in the deciding Game Three and claim the Division A title in the Sacred Heart Ateneo Alumni Basketball Athletic Association (Shaabaa) Cebu Landmasters Cup at the Ateneo de Cebu basketball court along General Maxilom Avenue on Wednesday, Nov. 13, 2019.

Down 35-27 at halftime, the grizzled veterans of 1990 led by former pro Joel Co, Dave Lim and Dennis Que started to assert themselves to take over the lead, 52-45.

Then, after 1999’s Jeremy Huang scored a deuce to bring his team to within five, 1990 responded with three-pointers from Co and Que and a short jumper from Lim to raise their lead to 13, 60-47, and all but seal the victory with just 6:32 remaining.

After a subpar performance in Game Two, Co exploded for 30 points, seven rebounds, five assists, two steals and a blocked shot while Que added 13 markers, six boards, six assists and two steals. Lim meanwhile, almost had a double-double with his eight points and 10 boards. Batch 1999 was led by the 23 points and 13 rebounds of Huang. (JNP)