AP Source: Carmelo Anthony to return to NBA with Blazers 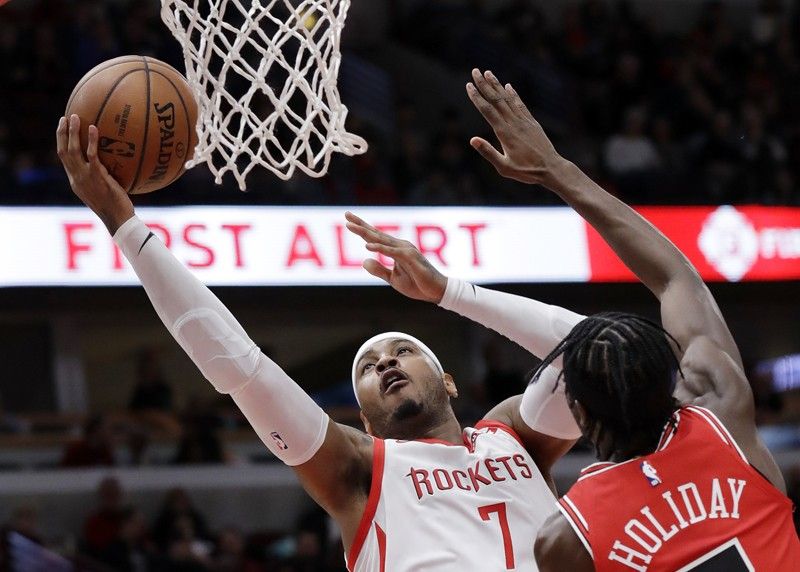 NEW YORK. In this November 3, 2018, file photo, Houston Rockets forward Carmelo Anthony (left) drives to the basket against Chicago Bulls forward Justin Holiday during the first half of an NBA basketball game in Chicago. A person familiar with the details said Anthony is returning to the NBA with the Portland Trail Blazers. The 10-time All-Star has not played since a short stint with the Rockets ended a little more than a year ago after just 10 games. (AP)

CARMELO Anthony is getting another shot in the NBA.

The 10-time All-Star is returning to the league with the Portland Trail Blazers, a person with knowledge of the details said Thursday, November 14.

Anthony hasn’t played since a short stint with the Houston Rockets ended a little more than a year ago after just 10 games. But the Blazers hope there is still enough game left in the 35-year-old forward to help them overcome a 4-8 start.

Anthony’s deal with Portland was confirmed to The Associated Press on condition of anonymity because it has not been announced. It was first reported by ESPN.com, which said that Anthony would join the team on its upcoming road trip.

Anthony is a three-time Olympic gold medalist but struggled at the end of his recent stops in Oklahoma City and Houston following 6 and a half seasons in New York. He continued to work out with NBA players, and his many friends and supporters insisted he was still good enough to play in the league.

Now he will get a chance to prove it.

Anthony was acquired by the Chicago Bulls from Houston on January 21, with the intention of trading him before the deadline or letting him go. He averaged 13.4 points in 10 games with the Rockets last season, but the team quickly decided Anthony wasn’t the right fit with the system they play under Mike D’Antoni.

Anthony can still score -- he ranks among the top 20 on the NBA’s career list -- but his preferred style of doing it has been replaced by a faster-paced game that exposes his defensive weaknesses.

Anthony was traded by Oklahoma City to Atlanta in July 2018, a move that preceded the Hawks releasing him to sign with the Rockets. The Bulls, technically, were his fourth franchise in seven months.

Eight of Anthony's 10 appearances for the Rockets came off the bench after the Number 3 pick in the 2003 draft had started all 1,054 games he'd played in his first 15 NBA seasons. He has averaged 24 points in 16 seasons.

Anthony fills a need for the Blazers, who are short-handed at forward. Zach Collins recently had shoulder surgery that is expected to keep him out for at least four months. Rodney Hood has been bothered by back spasms, but returned for the team’s loss to Toronto.

Center Jusuf Nurkic remains out after breaking his leg in a game last month and isn’t expected back until after the start of the new year. Pau Gasol was signed by the Blazers in the offseason but is still rehabbing from foot surgery.

The Blazers were reportedly interested in Anthony in the summer of 2017. Portland guard CJ McCollum tried to woo him with a photoshopped Instagram post that showed the future Hall of Famer in a Blazers jersey. (AP)