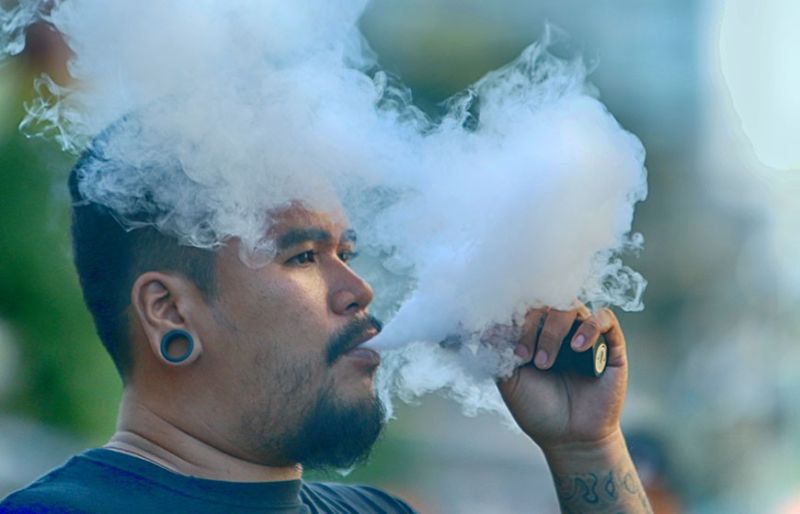 STOP NOW. A man uses an electronic cigarette in Cebu City. The first case of e-cigarette or vape-associated lung injury in the Philippines has been recorded in Central Visayas, prompting the Department of Health to ask users of e-cigarettes or other vaping products to stop. (SunStar Photo/Alex Badayos) 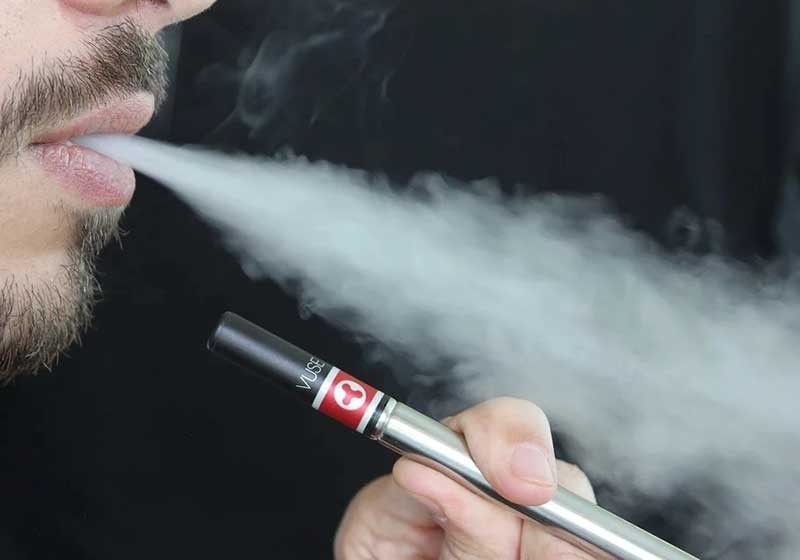 A 16-YEAR-OLD girl from Central Visayas has become the first case of electronic cigarette or vape-associated lung injury (Evali) in the Philippines, according to the Department of Health (DOH).

In a statement, DOH Secretary Francisco Duque III said the patient was admitted at an undisclosed hospital and had a brief stay at the intensive care unit (ICU).

“Patient is well with no recurrence of symptoms. Patient had abstained from using e-cigarettes and combustible cigarettes since her hospitalization,” said Duque.

Duque said the patient started using e-cigarettes with flavored e-liquid daily in March 2019 for three to four months before shifting to combustible cigarettes.

Two weeks prior to admission, the patient had non-productive cough, with medications providing no relief. Hours prior to admission, she had sudden onset of difficulty of breathing and was rushed to the Emergency Room, where she was assessed to be in respiratory distress.

The patient was referred to a private pediatric pulmonologist in the Visayas, who then advised transfer to the ICU for close monitoring. The girl was later transferred to a regular ward and discharged on the sixth day with a diagnosis of Evali.

Jaime Bernadas, regional director of DOH Central Visayas, however, said he had yet to trace the report of Evali in the region.

Bernadas also said the DOH had yet to gather the statistics on how many people in Central Visayas use e-cigarettes.

In July, the DOH said the 2015 Global Adult Tobacco Survey recorded 0.8 percent of the Philippine population as e-cigarette users, or more than 800,000 people.

“We are now encouraging everybody to stop vaping. Just like smoking, it has problems. It’s a foreign body. It is still smoke and there are still chemicals. So it is still harmful,” Bernadas said Friday.

E-cigarettes or vapes, the DOH said, are combinations of non-tobacco-containing e-liquids or refills and an electronic delivery device.

These systems produce aerosol, mist or vapor that users inhale by mimicking the act of smoking. Current literature shows that composite contents of and emissions from these devices are not completely without harm.

In a July press release, the DOH said contrary to claims that e-cigarettes help in smoking cessation, “there is barely sufficient evidence-based research to prove so.”

In fact, the department said, the Philippine Pediatric Society has said it is strongly addictive and potentially cancer-causing.

Among the harmful chemicals in these devices are nicotine, ultra-fine particles, carcinogens, heavy metals and volatile organic compounds.

Just last October, the DOH urged all government and private hospitals, clinics and other health facilities to monitor and report cases of Evali.

This after the World Health Organization (WHO) introduced International Classification of Diseases (ICD) 10 code U07.0, which is an international tool for classifying and monitoring diseases, to be used immediately for reporting acutely ill patients, who have used electronic cigarettes in the last 90 days, with no other plausible causes for illness.

In response, DOH Undersecretary Eric Domingo renewed their call for those using electronic cigarettes or other vaping products to stop.

“If you are currently using electronic cigarettes, you are at great risk for Evali. Ask your doctor about the best ways to quit, and stay away from its aerosol emissions,” said the health official.

Among those most vulnerable are individuals under the age of 25, pregnant women, immunocompromised persons, elderly and those with heart disease.

He also urged the Regional Trial Courts (RTCs) of Pasig and Manila to resolve as soon as possible the pending case versus the DOH and the FDA Administrative Order 2019-0007 for the regulation of the manufacturing, selling and usage of e-cigarettes and vapes.

“As international evidence points out, every delay in regulating electronic cigarettes is a step back for public health. The resolution of these legal issues is in everybody’s interest,” Domingo said.

Writs of preliminary injunction were issued last October by the Pasig and Manila RTCs against AO 2019-0007 after its legality was put to question by a certain Ryan Sason and by Clean Puff, respectively. (HDT, WBS)