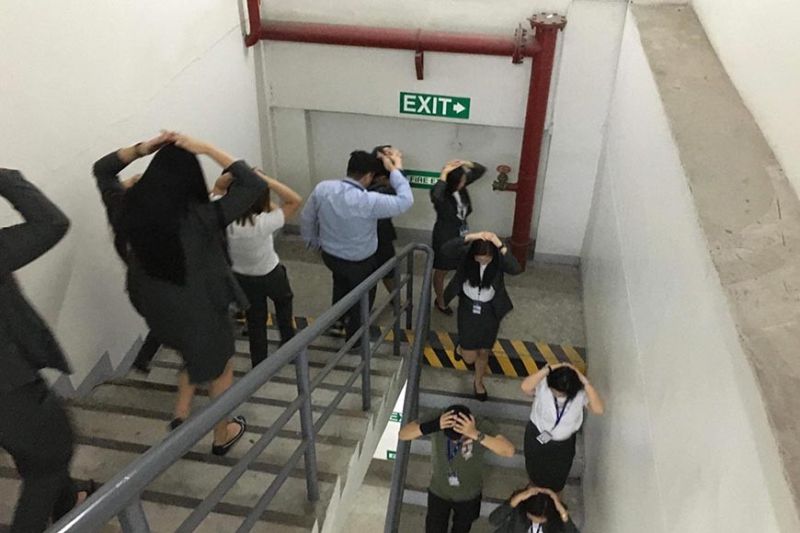 About 582 employees, affiliates, and tenants at SM City Tarlac (SMTL) participated in the shake drill activity, which was conducted along with the Tarlac Provincial Disaster Risk Reduction and Management Office (PDRRMO), local Bureau of Fire Protection (BFP), and the Philippine National Police (PNP).

The earthquake drill is conducted quarterly to heighten the preparedness level of mall employees when a quake strikes.

The drill also aims to highlight and continuously practice the capability of all SM Supermalls to execute procedures that will address the safety needs of people should a natural disaster, such as an earthquake, occur within its grounds.

It also offers an opportunity to institutionalize the activity to further raise earthquake safety consciousness among the public, hence, develop a disaster-resilient community.

During the drill, signages and paraphernalia were put in place, while all marshals were in their command posts.

At 8 a.m., the mall public address (PA) system started announcing a reminder to tenants and employees regarding the earthquake drill. The announcement was repeated every 30 minutes. At 9 a.m., ringing of fire alarms was played in the PA system signaling the start of the drill.

All employees, tenants, affiliates and agencies performed "duck, cover and hold" or DCH position under payment counters, sturdy tables and seats, among others.

After the 45-second ring, evacuation was performed. Marshalls led the evacuation of the premises and the assembly at the evacuation areas. Clearing operations were also conducted to ensure that no one was left in the building.