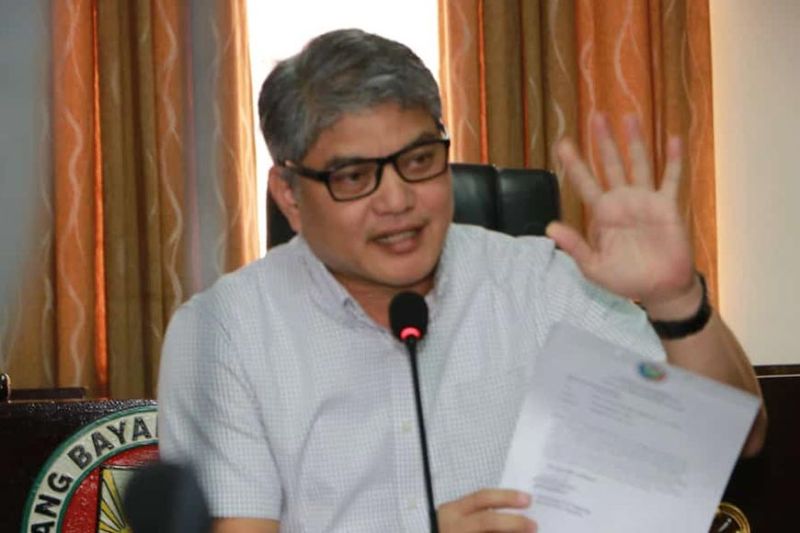 PAMPANGA. Magalang Vice Mayor Norman Lacson shows the memorandum order coming from the Office of the Mayor ordering him to vacate his office, while Mayor Romulo Pecson explains that the chief executive has the power to allocate and assign office space to municipal and other officials owned by the municipal government. (Chris Navarro)

THE vice mayor of Magalang town has decried an executive memorandum ordering him to vacate his office.

Stating that the mayor has the power to allocate and assign offices space to municipal and other officials, Pecson gave Lacson 72 hours to vacate his office at the Magalang Legislative Building and Hall of Justice.

"I am staying in my office," Lacson said despite the lapse of the allotted time for him to vacate on Friday, November 15, at 9 a.m.

Lacson also asked how he can fulfill his duties without a proper office.

In a press conference at the Municipal Council Session Hall, Lacson narrated what he believed has led to the issuance of the order.

He said he asked two unidentified persons who were installing unknown equipment at the legislative hall without any proper coordination with the appropriate offices.

The next day, Lacson received the order to vacate.

"While recognizing and not questioning his powers as cited in the memorandum, these powers are not absolute nor are meant to be exercised capriciously and with malice bordering on abuse of authority," Lacson said.

"It is my right and my responsibility to hold office in the legislative building as the presiding officer and vice-mayor," he added.

Lacson also said it was "an insult to the past and future honorable members of the Municipal Council to evict the presiding officer from his offices, especially in the building that was requested and constructed by my efforts and the generosity of former Pampanga First District Representative Joseller Guiao.

Asked for comment, Pecson said the area he wanted Lacson to vacate will be allocated for the Business Permit and Licensing Office (BPLO).

"The Magalang BPLO is on the first floor of the legislative building. The space he gave for the business office was too small to accommodate the number of business permit payers in town," Pecson said.

He said there are about 3,000 business establishments in Magalang town.

"How can we accommodate all of those business owners if we only have a small office?" Pecson asked, adding that he wanted the town to be business-friendly by providing comfortable space for local businessmen.

Pecson also said the vice mayor has an office on the second floor of the legislative building and the Municipal Council Session Hall for him to work at.

Although Lacson refused to vacate his office, Pecson said the order will be implemented.