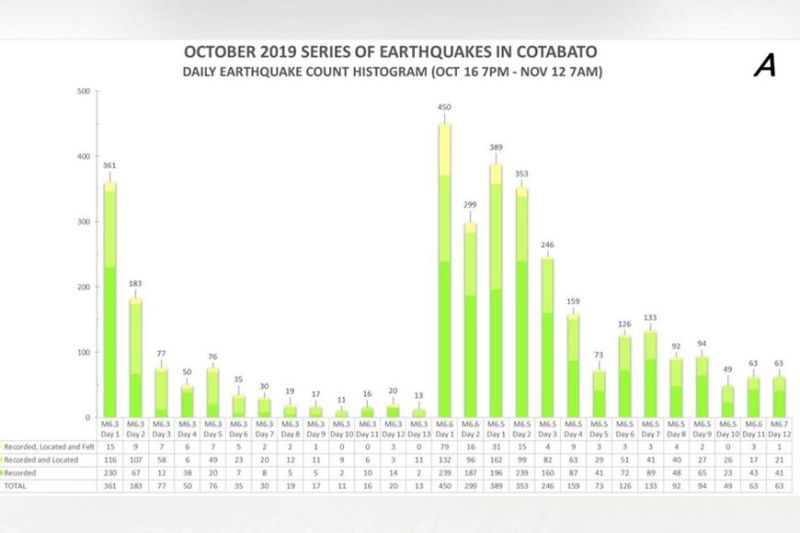 THE Department of Science and Technology (DOST)-Philippine Institute of Volcanology and Seismology (Phivolcs) reported a total of 3,497 aftershocks from three powerful earthquakes that rocked Mindanao beginning October 16 up to November 12.

"The depths of these earthquakes range from seven to nine kilometers. Initial information on the hypocenters of the earthquakes and their focal mechanism solutions suggest that they are generated by the Cotabato Fault System, a system of strike-slip faults transecting the provinces of Cotabato, Davao del Sur, Maguindanao, Sarangani, South Cotabato, and Sultan Kudarat," Phivolcs said.

With the quick succession of these events, damage to structures was severe and widespread that also triggered heologic impacts such as landslides especially in the area of Makilala, Cotabato.

The DOST-Phivolcs Quick Response Team (QRT) was immediately deployed on October 19 and October 30 to conduct earthquake information dissemination and education for local government units (LGUs) and locals in affected areas.

There was also deployment of temporary seismic stations for continuous aftershocks monitoring; and assist the LGUs, together with the Mines and Geosciences Bureau, in assessing selected evacuation/relocation sites in terms of earthquake hazards.

"Based on field investigations, the geologic impacts included numerous tension cracks and earthquake-induced landslides, especially near the epicentral region in Makilala, Kidapawan City, and Tulunan in Cotabato; and in Magsaysay and Bansalan in Davao del Sur," Phivolcs report read.

Phivolcs cited that poor engineering and the use of substandard construction materials were the major contributing factors to the damage incurred following the strong tremors.

Meanwhile, as the aftershocks continue, DOST-Phivolcs reminded the public to do the "Duck/Drop, Cover and Hold in time of shaking. They also recommended that the damaged buildings and infrastructures should be inspected by engineers and should not be used unless assessed as safe.

They also suggested that the reconstruction or construction of houses and buildings should conform with the National Building Code. There should also be formal training for local masons and carpenters on the proper construction practice and use of standard construction materials, it added.

"Strengthen the implementation of and compliance to the National Structural and Building Code of the Philippines. This can be done through the review and formulation of policies and ordinances that will address the gaps in the issuance of building permits and monitoring of building constructions," Phivolcs said.