Trees cut to give way for school building 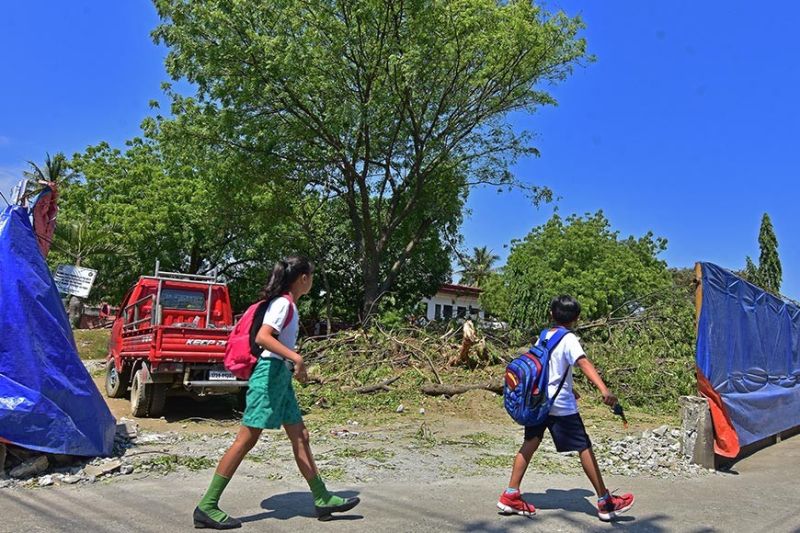 THE cutting of trees in the Nograles Park on Friday morning, November 15, contrary to an online post of an environmentalist, complied with the necessary permits, according to its project implementors.

D'Bone Collector Museum Director Darrell Blatchley, on the same day, posted on his Facebook account pictures of the cut trees in the Nograles Park to make way for the construction of a four-story school building of Erico T. Nograles National High School (ETNNHS) in Bucana, Davao City.

According to the caption, the project, worth more than P78 million, is implemented by the Department of Public Works and Highways (DPWH)-Davao City District.

Blatchley, in a personal message to SunStar Davao, earlier claimed that the project has no tree cutting permit.

But he said in a phone call interview later that the City Engineer's Office (CEO) confirmed that the project had secured a cutting permit from the City but it was not earlier cited in their project bulletin, thus lacking transparency in their implementations.

"Naa man sila'y existing school, ngano dili nalang nila i-renovate ang existing nila nga eskwelahan. Ngano putlan (man gyud) ang (punuan sa) park? (The school has an existing lot. Why can't they just renovate and utilize their existing lot? Why do they have to cut down the trees at the park?)," Blatchley said.

Ortiz, meanwhile, said in a phone interview that the DPWH did not secure the permit as the agency was only tasked to man and implement the project.

ETNNHS principal Jocelyn Simafranca said the school had complied with all the necessary permits prior to the cutting of the trees.

Simafranca said they were able to secure a resolution from the 18th Davao City Council interposing no objection to the proposed construction of the school.

The school official also revealed that the Nograles Park, formally known as Doña Vicenta Park, is not a city-owned property nor supervised by the Davao City Parks Board.

She said the expansion was deemed necessary to cater to more senior high school students.

"Wala nama'y laing space diria sa Barangay 37-D. Kani nalang man gyud (We don't have enough space here in Barangay 37-D. This [Nograles Park] is the only vacant lot left)," Simafranca said, adding the lot was originally owned by the National Housing Authority and was donated to the Department of Education through a Deed of Usufruct or Deed of Donation.

Meanwhile, prior to the jumpstart of the project, she said they consulted the DPWH as to which trees will be removed.

According to the permit, 25 trees, majority are composed of Neem trees, will be cut.

Simafranca said some trees were spared to provide shade to the students during daytime.

She said, however, that despite the miscommunication, she understands Blatchley's concern regarding the cutting of the trees.

She said the school is also aware of the recent incident of the chopping down of trees in Clifford Park, which happened two weeks ago.

"That is a good indicator that there are really people who really care for the environment," Simafranca said.

As stated in the permit, the school will replace each chopped tree with 50 seedlings, she said.