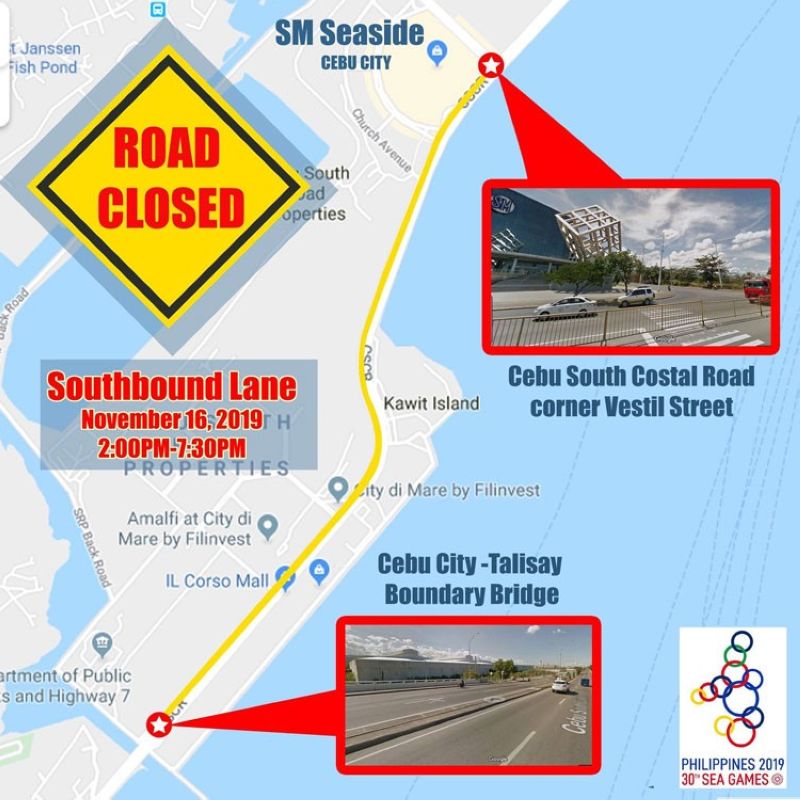 COMMUTERS and motorists who often pass by the Cebu South Coastal Road (CSCR) to get to Cebu City are urged to plan their trips at an earlier time as a massive gridlock is expected to be felt due to the 30th SEA Games Torch Relay at the South Road Properties (SRP) from 1 p.m. to 7 p.m. on Saturday, Nov.16, 2019.

Jonathan Tumulak, City of Talisay Traffic Operations and Development Authority (CT-TODA) head, advised those traveling to Cebu City to travel as earlier than 12 noon to avoid getting caught in the road closure being implemented by the Cebu City Transportation Office (CCTO).

The CCTO is set to close the southbound or mountainside lane of the CSCR for the torch relay, with only the northbound or seaside lane open to two-way traffic.

Tumulak said in preparation for the road closure and subsequent gridlock that will follow, they will deploy traffic enforcers in around corners of CSCR that could be heavily affected by the traffic jam.

CCTO is set to close down a portion of the CSCR from SM Seaside City to the bridge that serves as boundary between the cities of Talisay and Cebu City.

Separately, Talisay City Mayor Gerald Anthony "Samsam" Gullas said motorists and commuters have the option of passing by the N. Bacalso Avenue to get to their destination.

But like Tumulak, Gullas urged motorists to plan their trips early as the ongoing repairs of the Bulacao bridge at the national highway is also being implemented.

Gullas, however, was able to convince the contractor to delay the rehab works for a day due to the 30th SEA Games torch relay. (FMD/JKV)