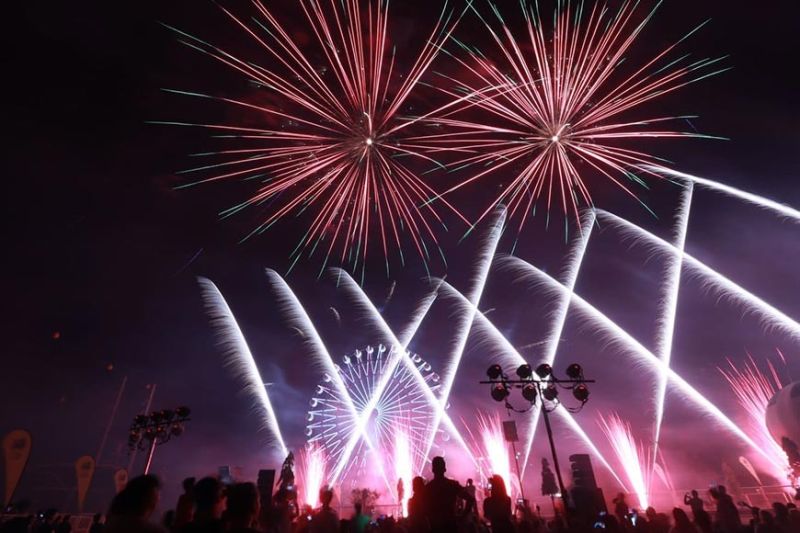 The Sky Ranch Giant Ferris Wheel in SM City Pampanga is transformed to the Biggest Lantern of Hope with colorful lights and fireworks display on Saturday, November 16, 2019. (Photo by Chris Navarro)

CITY OF SAN FERNANDO -- Thousands of spectators were in awe as the tallest ferris wheel in the Philippines, the Pampanga Eye, transformed anew into the Biggest Lantern of Hope 2019 on Saturday evening, November 16, at the SM City Pampanga Amphitheater.

Standing 65 meter or 213 feet tall, the Pampanga Eye was adorned with 17,664 dancing led lights and became the backdrop of the 10-minute colorful pyro-technic musical show with fireworks in the inner part of the wheel, on-ground and aerial.

The Biggest Lantern of Hope is SM City Pampanga's modern adaptation of the world-renowned Parul Sampernandu or the Christmas lantern of City of San Fernando which stands 20 feet and features up to 10,000 colorful lights.

"Five years ago was when we first lit the Biggest Lantern of Hope, all we want is to share the holiday vibes to our mall goers. Since then, we are very delighted to know that we have become part of the Christmas tradition of Kapampangan families, and even those from Central and northern Luzon who joined us in this annual event," she said.

This year, SM City Pampanga is making the celebration merrier as it will be illuminating Pampanga sky with same pyro-musical spectacle for three Saturdays on November 23, 30 and December 7 at 6:00 p.m.

"It will surely be the same show, if not grander, for the next three Saturdays as we want other mall goers who missed tonight's event to enjoy the same holiday vibes we experienced now," she said.

True to its name, the event indeed brought a ray of hope to Aeta children from Babo Pangulo in Porac, Pampanga who were among the communities badly-hit by the April 22 earthquake, as well as members of the Autism Society of the Philippines-Pampanga Chapter through a gift-giving activity.

Santa Claus, together with officials of Pampanga and SM Supermalls, led the activity where children received toys and groceries, aside from the afternoon entertainment they experienced at The Sky Ranch.

"Christmas, as they say, is for the children and so this year, we decided to dedicate the event to the Aeta children who were devastated by the recent earthquake in the hope that we can relieve whatever distress they felt or feeling, and let them know that they are never forgotten. Of course, we also invited our friends from the Autism Society of the Philippines who have been our partner for several years now," Madlangbayan said.

She stressed that the strong partnership of the City Government and private sector, including that of SM Supermalls, has been vital in bolstering the city's title as the Christmas Capital not only of the Philippines, but also of Asia.