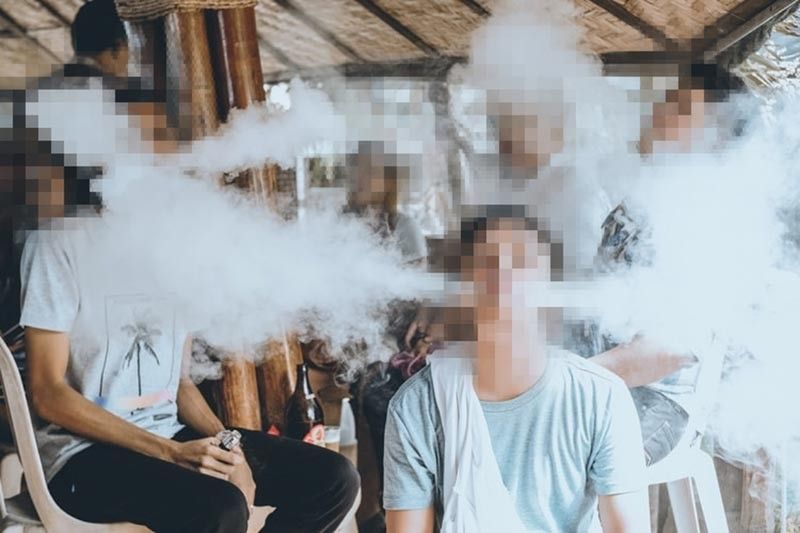 Group of teenagers in one of their their vaping sessions. (Photo by Rainier Ridao/Unsplash) 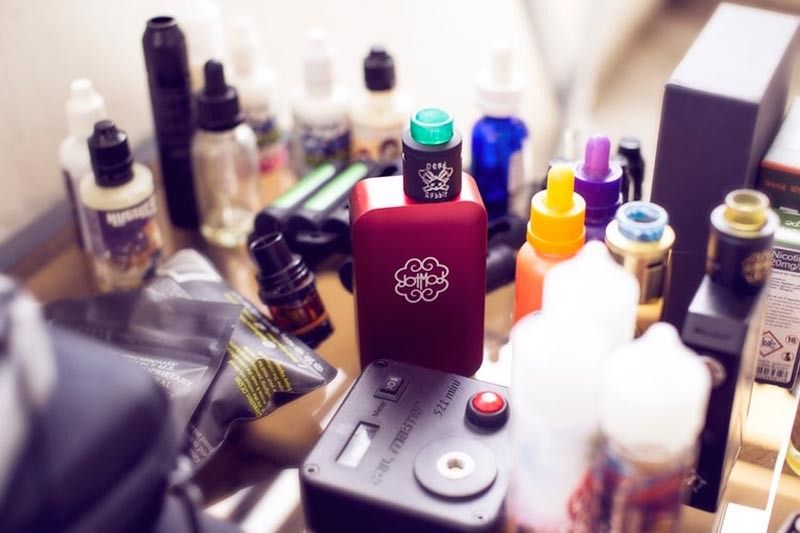 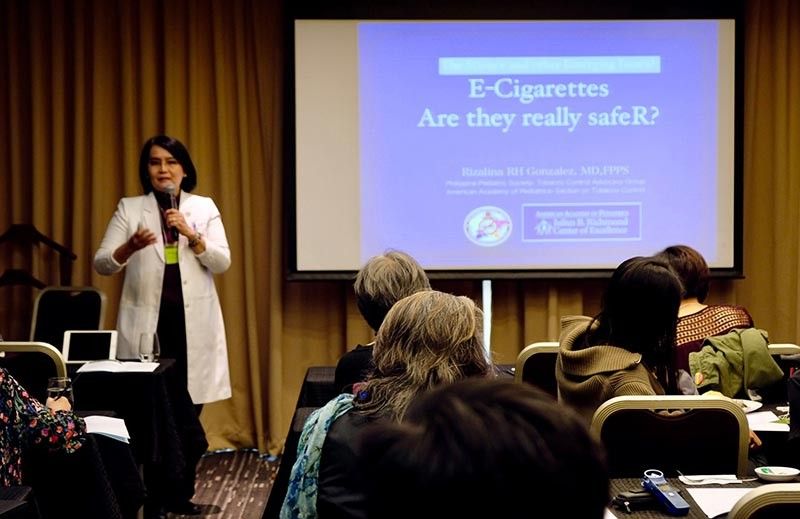 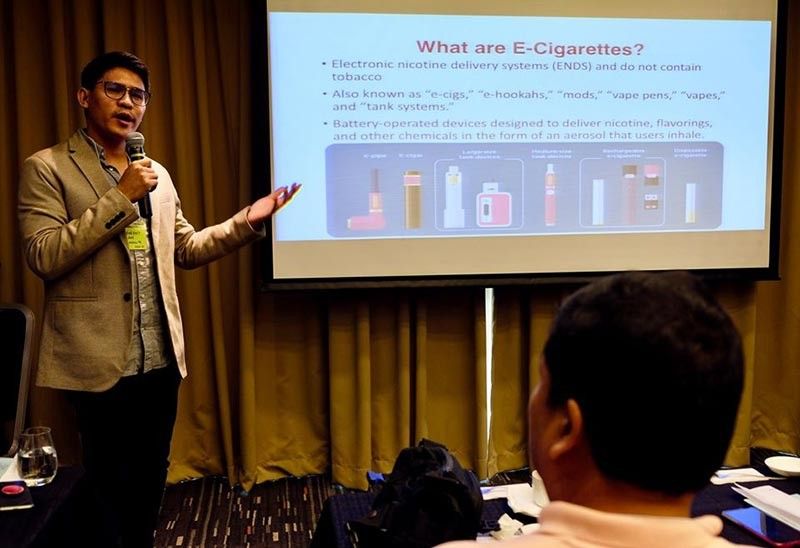 THE first case of electronic cigarette or vape-associated lung injury (Evali) in the Philippines involved a minor.

On Friday, November 15, 2019, Health Secretary Francisco Duque III revealed a girl, 16, from Central Visayas, was hospitalized and had a brief stay at an intensive care unit (ICU) after experiencing coughing and difficulty of breathing. The girl went into respiratory distress at the emergency room of a hospital.

Department of Health (DOH) disclosed the minor started using e-cigarettes with flavored e-liquid daily in March this year for three to four months before she shifted to combustible cigarettes.

Gonzalez explained that electronic nicotine and non-nicotine delivery system (Ends) or widely referred as vapes or e-cigarettes create an aerosol (not vapour) by using a battery to heat up liquid that usually contains nicotine, toxicants, flavorings, heavy metal, and other chemicals. Users inhale this aerosol into their lungs by mimicking the act of smoking. E-cigarettes, she said, can also be used to deliver cannabinoids such as marijuana, and other drugs.

“E-cigs nowadays are very accessible and are packaged and marketed creatively to attract young users. It was perceived as a cessation device for traditional smoking but actually it is just a cheat device. Users thought it is cool, lit, and safer, but it is as dangerous as traditional cigarettes,” Gonzalez said.

Youth in focus: Why more young people are into it?

When e-cigarettes entered the world market, it was marketed as a healthier alternative to smoking. But there is no medical study available to back this claim.

A 17-year-old occasional vape user said he buys vape juices for P250 for what he described as low nicotine. Juices with higher amounts of nicotine are about P450 to P650.

“Yung juice minsan di ko na ma-afford pero minsan kaya ko naman. Di ko kasi palaging ginagamit so tumatagal ng one month (I can afford the juice sometimes. I don’t use it regularly so it lasts for a month),” he said, adding that he only use vapes during vaping events with his groups in Barangay Bucana.

He attended The Parents Forum: Growing Public Concern on E-cigarettes organized by the JCI Lakambini Davao on November 9 in Davao City.

He said he started vaping when he was about 16 years old. He got interested in making smoke tricks.

He said he has experienced coughing and he was not yet addicted so he can stop if he wants to. But he is afraid he will lose friends in the vaping community.

He added that he has been reprimanded countless times by his parents but he only lies to them.

Southeast Asia Tobacco Control Alliance executive director Dr. Ulysses Dorotheo said according to an unpublished 2019 data of the Food and Nutrition Research Institute (FNRI), one of five e-cigarette users are 19 years old and below.

In July, the DOH said the 2015 Global Adult Tobacco Survey recorded 0.8 percent of the Philippine population as e-cigarette users.

In United States, there are 2,051 cases of vaping-related lung injuries as of November 5, 2019, a total of 39 of this figure died. In the demographics, 54 percent of the users are 24 years old and below.

“Flavors and creative promotions and approaches using wide variety of media channels hook youth into e-cigarettes. These have been used in the past formarketing conventional tobacco products to youth and young adults,” Dorotheo said.

In a survey by the Philippine Pediatrics Society on Grades 7 to 9 Filipino students, 39 percent were influenced by their friends or family members to use vape, 31 percent were enticed by mint, candy, fruit, or chocolate flavours, and 17.1 percent believe vapes are less harmful than tobacco use.

HealthJustice legal consultant lawyer Benedict Nisperos said one of the strategies to entice new users of e-cigs products is flavorings. There are around 15,500 e-liquid registered flavors around the world.

“Most of the flavors for vapes are fruity or sweet or mint and are marketed as fun, hip, or a social symbol, which implies it is targeted to young people,” he said.

Some youngsters believes that they can now puff without actually smelling bad unlike cigarette smoking, and this is through vape flavours.

“In facing the e-cigarette epidemic, we should always go back to our tobacco experience. Decades ago, it was the same tactics that were used by the tobacco industry in entering the market. They introduced tobacco as a hip, healthy product, and a status symbol. They are using it now with e-cigs,” Nisperos added.

He also debunked the claims of some that the campaign against e-cigarretes is orchestrated by tobacco industry players in order to draw back users to traditional smoking.

The youth hooked into e-cigarretes are under the illusion that it is safe and cool.

This is what Social Watch Philippines project assistant Chelsea Hill underscored in her talk during the same forum.

“The youth are uninformed of the negative impacts of e-cigs. I believe, the youth are only attracted to it because they are misinformed,” she said adding the existing narrative made by the industry to the market is the assumption that e-cigarretes or vapes are cool, hip, and safer.

The youth leader said empowering the youth is the way forward. Hill also raised how it is alarming that e-cigarretes are becoming more accessible to the youth as some are sold in installment while others come in group to a common vaping area and use one e-cigarrete device for all. Even vape device rental is also existing among e-cigarrete users community.

Health policy officials and advocates are pushing for regulating if not banning e-cigarrete in the Philippines. Approaches considered are the regulation or removal of the flavors and imposing higher taxes on the product to further discourage people, especially minors to use it.

The Republic Act 11346 or the Tobacco Tax Law of 2019 inked into law on July 25, 2019, has already added tax on tobacco and e-cigarettes as well as regulating its selling to minors, prohibiting its use in public places, and putting of graphic warnings on its labels.

But this is not enough especially on the e-cigarettes part.

“We should tax e-cigarettes equal or more than the traditional cigarettes,” Arjay Mercado of Action for Economic Reforms said.

For vape user Kadie, 27, is against the total ban of the product emphasizing proper regulation on it is enough and fair.

“If they wanted to shutdown totally the vape industry, DOH should ban first the tobacco industry. Perhaps it will be proper to ‘just regulate’ the use of e-cigarrete instead of totally banning it,” he said.

Another vaper Paolo, 30, for his part said, this should be a warning to all minors whom he addressed as “pa-cool kids” to stop vaping in public areas.

Meanwhile, President Rodrigo Duterte has certified Senate Bill No. 1074 or the bill seeking to increase the taxes on alcohol products, heated tobacco products, and vapor products or e-cigarettes, as a priority measure.

The President’s move was inspired by the urgent need to generate additional revenue to support the effective implementation of the Universal Health Care Act and to further protect the right to health of the people.

The Senate bill is sponsored by Senator Pia Cayetano.

But for most health advocates, banning the use and selling of e-cigarretes is the most effective card. Globally, 43 countries have already banned e-cigarretes on various levels.

“If we will not ban or at least regulate it properly, and let it proliferate, it will wipe out our efforts on tobacco decades ago, causing more deaths,” Nisperos said.

E-cigarette selling and operations call for a thorough review and regulation. The first Evali case involving a 16-year-old girl is a wakeup call to all – users, sellers, and policy makers.

Secretary Duque has already issued a call to quit vaping or e-cigarrete smoking to all existing users, but with the gravity of the growing public health crisis, the Philippines might need more than just that. (With reports from RAG)