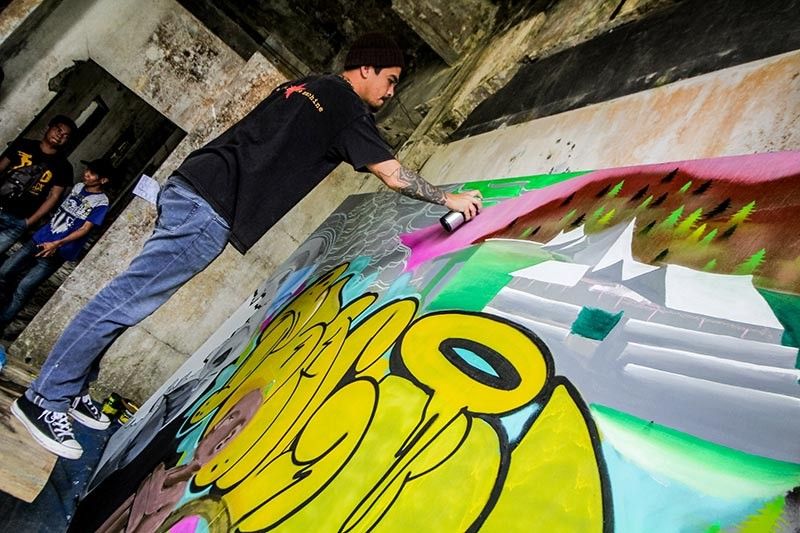 BAGUIO. A local artist brings color and life into a blank canvas at the Diplomat Hotel last week. Today, this piece, along with other mural painting, is displayed along Session Road starting Sunday night, November 17, until November 24. All murals are products of the Ibagiw creative festival and are up for auction. (Jean Nicole Cortes)

A FUSION between Baguio and Angono Rizal artists is on display.

Dubbed as "Salubong," [meaning "to meet"] the exhibit solidifies the gathering of artists from two different areas, both with diverse cultures and art converging in one grand display. It opened over the weekend as one of the highlights of the Ibagiw Festival at the Old Diplomat Hotel.

The Ibagiw festival is the second creative festival of the city, now led by the Baguio Arts and Creative Council (Bacci), Mayor Benjamin Magalong and festival creative director Karlo Altomonte.

Angono locals Ed and Venus Navalta, with Mayor Jeri Mae Calderon, pledged their participation in the festival, bringing with them the Angono Chorale Ensemble with Edith Fuentes and Richard Gappi, the Angono Higantes with their 16-man artist group.

The festival runs until November 24 with activities that include busking, performances, product expositions and exhibitions over the span of nine days.

Artisans, battling it out in competitions in metal crafts, backstrap weaving, basketry and woodcarving since November 11, will also be judged and conferred. (With reports from Leon Altamonte, Ibagiw documentation team)