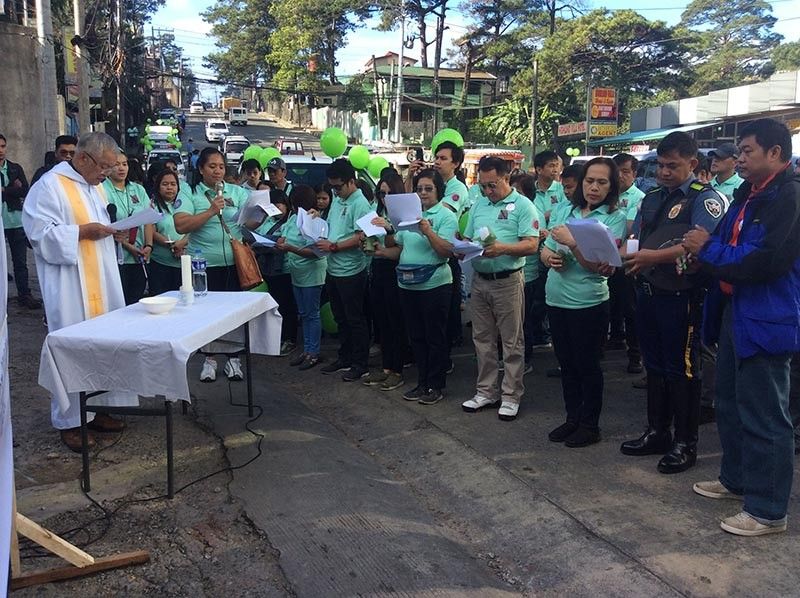 LIVES lost on the road were remembered with a commemoration held at the most dangerous highway in Baguio City.

The Land Transportation Office (LTO)-Cordillera led a commemoration for road crash victims on Sunday, November 17, along Buhagan, formerly known as Bokawkan road, in Baguio City with LTO Cordillera Director Francis Rey Almora explaining road crashes are a major cause of death in all age groups and are the leading cause of death for children and young adults aged 5 to 29 years old.

"Unfortunately here along Buhagan road, we have already had 23 deaths and some 100 injured persons due to road crashes and it is very unfortunate and we are not supposed to count the numbers because one life is too many, but with that figure, we could deduce that road crashes can happen anywhere so it's upon us road users to look at our own safety," Almora said.

More than half of all road traffic deaths are among vulnerable road users: pedestrians, cyclists, and motorcyclists. Pedestrians, cyclists, and riders of motorized 2- and 3-wheelers and their passengers are collectively known as "vulnerable road users" and account for half of all road traffic deaths around the world.

The day of remembrance has been declared by the UN for all road crash victims all over the world.

Almora said the commemoration is a first in the Philippines.

"This is being done for the first time nationwide simultaneously in all the regions of the country. We have just passed the law on the world day of remembrance, so we are now part of the global community that remembers the victims of road crashes. We would like to open the consciousness of road users here in Baguio City, particularly along Bokawkan road where many road crashes have occurred and again remind them that road crashes can happen anytime, anywhere," he said.

Since the adoption of the World Day of Remembrance for Road Traffic Victims, pursuant to General Assembly resolution 60/5, the observance has spread to a growing number of countries on every continent.

"Inherently along the terrain of Bokawkan road is prone to road crashes and we have seen the need for more road signage. Previously, we identify road crashes as road accidents which is something that we cannot prevent but it would appear from statistics that the common cause of road crashes is human error which is not an act of God, therefore it is not an accident, it is done by humans which is why we now call it road crash because it can be prevented, although we also accept that humans will always commit an error, so this safe system of roads being done, we recognized that because we are humans, there is always a chance that we will commit a mistake," Almora said.

The Day of Remembrance has become an important tool in global efforts to reduce road casualties by offering an opportunity for drawing attention to the scale of emotional and economic devastation caused by road crashes and for giving recognition to the suffering of road crash victims and the work of support and rescue services.

In 2008, remembrance services and other related events were held in such countries as Argentina, Australia, Brazil, Brunei Darussalam, Canada, India, Japan, Mexico, Nigeria, the Philippines, South Africa, Uganda and the United States, and almost every country in Europe.

A dedicated website was also launched to make the day more widely known and to link countries through sharing common objectives and the remembrance of people killed and injured in crashes.

"We hope that the other factors that contribute to road crash will be addressed so that we would not have cases of road crashes in the future. Mechanical defects cannot be considered as human error because it is preventable and if we do good maintenance on our vehicles and make it road worthy, then this can be preventable and so we have to do our part," Almora added.