Hornbills perching on their cage at the Negros Forest Park. (Photo by Carla N. Canet)

The signage reads: Do not disturb. Mother incubating the egg. (Photo by Carla N. Canet)

Hornbills perching on their cage at the Negros Forest Park. (Photo by Carla N. Canet)

The Negros Bleeding Heart pigeons that are sensitive to noise. (Photo by Carla N. Canet) 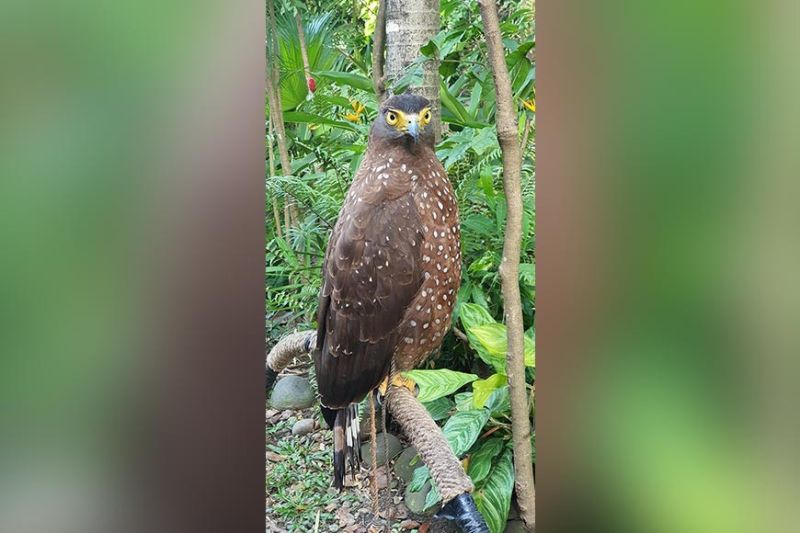 This is the North Capitol Road where the Negros Forest Park is located. (Photo by Carla N. Canet)

A TRANQUIL environment is essential for the different species of hornbills and the Negros Bleeding Heart pigeons especially when they start incubating in their nests, said Negros Forest Park Talarac researcher/biologist Jastin Magbanua and veterinarian Monica Atienza.

Those birds do not like noise or loud sounds because it builds up stress or caused them disturbance.

Ironically, Negros Forest Park is the only rainforest and wildlife sanctuary situated in the heart of Bacolod City and unfortunately, during the staging of the Ruby MassKara Festival, the South Capitol Road was utilized as among the festival sites. There were events which were canceled because of a serious concern raised by the administrators of the Negros Forest Park that were detrimental to the welfare of the birds if they had continue the events there.

Magbanua and Atienza said that indeed the birds got stressed not only by the loud sounds but also by the lights that reached inside the Negros Forest Park.

Some of the birds are nesting until now and there is a possibility that they will destroy their eggs if they hear noises or loud sounds.

These birds are considered critically endangered in Negros and Panay and they just want to protect them, said Magbanua and Atienza.

Dr. Atienza said, “The noise will affect them because it is unusual to the birds. But it’s good that the events did not push through as two of the six pairs of rufous-headed hornbills (Walden) and the pigeons were nesting. They are very sensitive to noise.”

Last year, there were birds that indeed dropped their eggs due to noise and that they don’t like a repeat of it.

Magbanua said, “a telecom company canceled their event because of the concern we raised. The organizers can have their event held in an area not too close to the park and their speakers should not face the park because that will reduce the noise. They can have their stage by the main street.”

Magbanua added that they want to provide the birds and other animals the most suitable habitat while they are in the middle of the city. One advantage of the location of the park is the accessibility to the people where they don’t need to go that far to learn about the animals that they have in their own island.