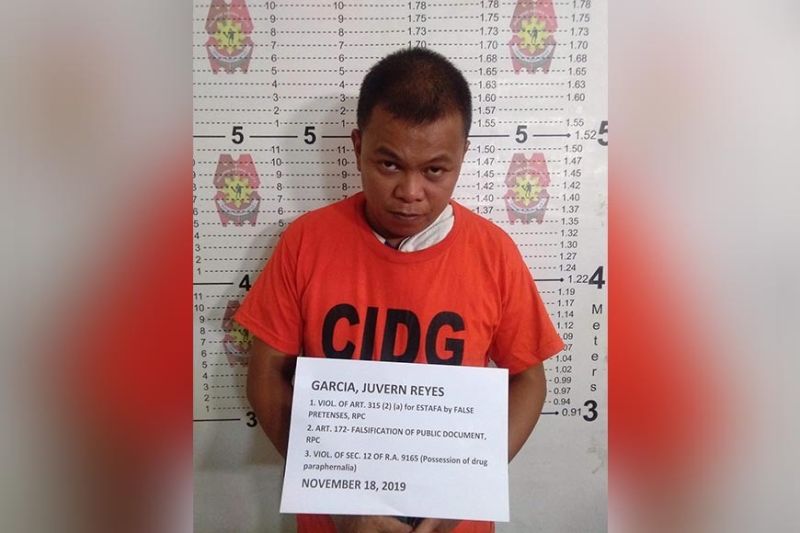 A MAN who introduced himself as a certified public accountant (CPA) lawyer was arrested by the police and the Criminal Investigation and Detection Group (CIDG) during an entrapment operation on Monday, November 18, at Kunisawa Apartment, Durian St., So. San Roque, Daliao, Davao City.

Based on the report provided by CIDG-Davao City Field Unit (DCFU) head Police Major Milgrace Cajes Driz, the suspect, identified as Juvern Reyes Garcia, was arrested at around 8:45 a.m. Monday in their Oplan OLEA.

The operation was carried out by CIDG Regional Field Unit 11-DCFU together with Toril Police Station. The suspect was caught in the act of accepting money from Juvy dela Pena Furui, the complainant, as payment for the processing of the judgment of the petition for recognition of foreign divorce as what he promised to her.

Garcia allegedly introduced himself as a lawyer and a CPA. Also, during the course of his arrest, authorities found drug paraphernalia on the premises of the accused.

Confiscated from his possession and control were the marked money amounting to P42,000, one fake Professional Regulation Commission (PRC) ID, and assorted drug paraphernalia.

Garcia was brought to DCFU office for booking and documentation and was turned over to Toril Police Station for detention.

At present, Garcia is facing multiple charges for violation of Article 315 (2)(a) for Estafa by False Pretense; Article 172 – Falsification of Public Document; and Violation of Section 12 of the Republic Act 9165 for possession of drug paraphernalia.