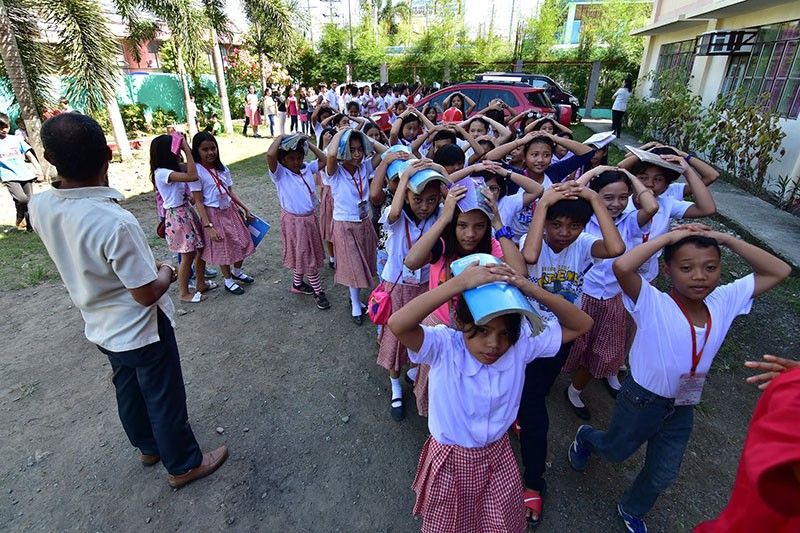 DAVAO. Department of Education Davao Region officer-in-charge Director Dr. Evelyn Fetalvero said she will issue a memorandum to all schools all over the region next week to make earthquake, fire, tsunami, and bomb drills a weekly practice in all schools. This is to make students and school staff ready for any kind of disaster. (Macky Lim)

FOLLOWING the recent earthquakes that damaged several classrooms in the region, the Department of Education in Davao Region (Deped-Davao Region) is now pushing for a weekly disaster drills in all schools.

Deped-Davao director Evelyn Fetalvero said that she will be issuing a memorandum circular that a weekly drill in various calamities in all schools to prepare the students, teaching and non-teaching personnel on the measures to be taken in times in unforeseen circumstances, such as earthquake, tsunami, fire, and even bomb-explosion.

“We need to really prepare our students in those times of uncertain situation,” Fetalvero said in a press conference on Monday, November 18 at the Ritz Hotel.

Her announcement comes after reporting that more than 900,000 students in almost 350 public schools, both elementary and secondary, in Davao region were highly affected brought about the recent earthquakes that struck some parts of Mindanao in October.

Although she has not yet disclosed the full details of the order, but she said it will be strictly implemented.

Meanwhile, she said her office will also address the lack of hard hats, which is required under the Department Order 37 or the Comprehensive Disaster Risk Reduction and Management in Basic Education Framework.

Admittedly, Fetalvero said not all schools have standby hardhats in their respective classrooms.

“We have to procure all the resources that they got,” she said, urging the private sector to help schools in procuring it.

Deped-Davao Region education support services division chief Warlito Hua said that prior to the proposed mandatory drill, he said there are different schools in the region that are already conducting it, either weekly or monthly.

He said the agency suggest that other schools should also start implement it for the safety of the school community.

“We suggest na pag-igihan pa nila lalo ‘yung kinoconduct nilang drills, since there are schools who are already effective in conducting it,” Hua said. (RGL)