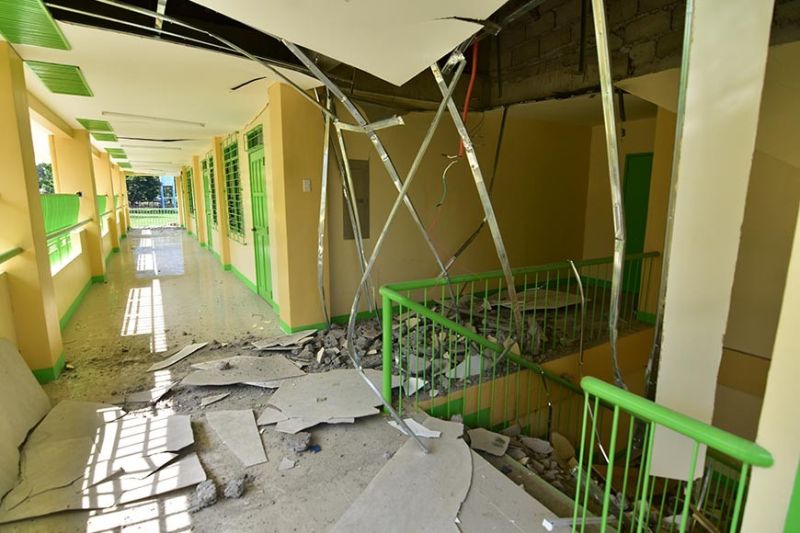 MORE than 900,000 students from nearly 350 public elementary and secondary schools in Davao Region were highly affected by the recent earthquakes that struck some parts of Mindanao in October, the Department of Education in Davao Region (Deped-Davao) said.

DepEd-Davao director Evelyn Fetalvero said in a press conference on Monday, November 18, that a total of 970,549 students from 344 schools were affected after the earthquake brought slight to major damage in school facilities.

Based on the DepEd-Davao data, Davao del Sur has the most number of schools affected with 111, while 295 classrooms were destroyed, and 207 classrooms had major damage, which cannot be repaired by the school.

Other school divisions also noted damage on some schools: Davao del Norte with 63, Panabo City with 56, Davao City with 43, Digos City with 26, Davao Oriental and Davao Occidental both recorded 15, Tagum City with 8, Compostela Valley with 6, and Mati City with only one.

Only minor damage was recorded in the cities of Davao and Mati.

Fetalvero said some classrooms were already damaged when the magnitude 6.6 struck in Tulunan, Cotabato on October 29, 9:04 a.m. However, a magnitude 6.5, in the same location struck on October 31, 9:11 a.m., causing further damage to these classrooms.

She said the region, overall, needs a total of 972 temporary learning centers (TLC) for the resumption of classes.

“We already requested for the construction of TLCs. That is why we already started with the procurement activity,” Fetalvero said.

Initially, she said the construction of TLCs was targetted to be completed by second week of December.

However, she requested it be done before the November ends.

“Hopefully, by last week of November, we could finish it. We hope to build the TLC our learners need,” Fetalvero said.

Although she said, TLCs “cannot bring back the ‘normalcy’ of the classes, as compared to the standard classrooms”, she said it is important that the children will have a space where they will be able to continue their regular classes.

“Prior to the conduct of the regular classes, there must be a psychological first aid activities that will be undertaken for them to go back to a sound mental condition,” the official said.

She said the Deped central office has allocated budget to “hardly-hit areas” for the procurement of the TLCs. Over P13 million were allocated to the Davao del Sur schools division, while more than P4 million for Digos City, and P2 million for Panabo City.

She said some areas already received financial assistance from their respective LGUs.

Meanwhile, Fetalvero said there are only two Davao del Sur municipalities where classes were suspended until November 30.

She said Digos had already resumed its classes yesterday. But she said they are still monitoring if the resumption of classes went well.

“Our effort now is really to bring back normalcy. Ang instruction ni director (Fetalvero), bisan wala’y structure, bisan sa ilalom sa kahoy, kinahanglan nga mag-meet gyud ang magtutudlo ug ang bata (even there is no clear physical structure for the classroom, or even just below the tree, teachers and students must resume classes) because that’s one way of providing psychosocial efforts for everybody, for children and teachers,” Atillo said.