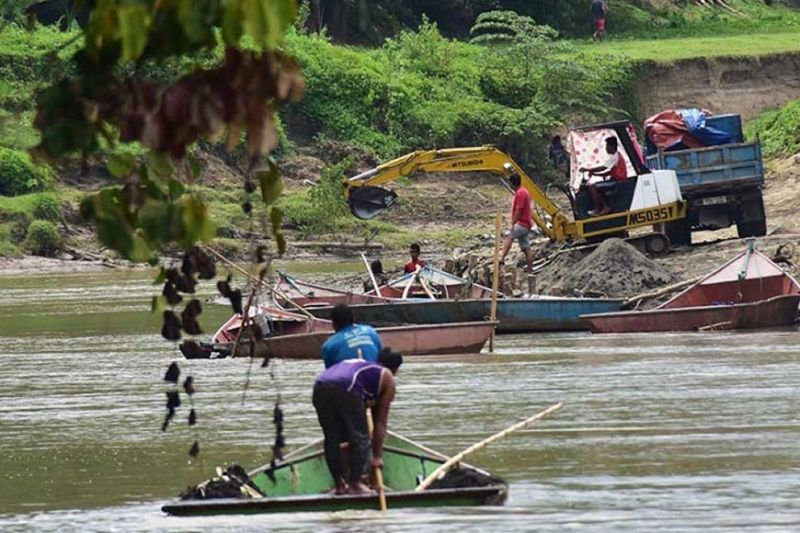 A STUDY by the Interfacing Development Interventions for Sustainability (Idis) on the environmental impact of sand and gravel quarrying in Davao City showed that the rivers flowing through the city are heavily silted.

Their study revealed that the Davao River in Barangay Malamba, Marilog District is badly silted. The riverbanks are disrupted and used as road access and motorpool for trucks. The road near riverbanks is also highly used due to the separator facility.

Thus, the village roads going to the area are very dusty, rough, and narrow, unsafe for locals especially crossing students.

Idis executive director Chinkie Peliño-Golle said based on their monitoring, the extraction cut off in the area is strictly at 5 p.m. and personnel from the Davao City Environment and Natural Resources Office (Cenro) inspected the sites daily. Cenro personnel arrived at the area at 11 a.m. The Cenro Ticketing officer stays along the Davao-Bukidnon Highway from 8 a.m. to 5 p.m. to monitor the truck loads coming from Barangat Malamba.

However, they received complaints that extraction of quarrying resources continues until night time. Meaning, those that are transported during this time were no longer accounted for.

The same with Site 2, the Davao River in Barangay Dalagdag, Calinan District is also experiencing high siltation and the river is turbid. In site 3, which is Lasang River in Paquibato, the quarry areas are situated from residential settlements and the dust coming from trucks are affecting motorists and commuters.

“Minimum of three loads each day of river mix that are delivered to Bunawan for further processing. In the previous years, illegal quarrying was an issue in the barangay and they were advised by Cenro to apply for a permit to make the operation legitimate. Other operators of Lasang River are registered and extracting resources at the jurisdiction of Panabo City,” Idis study states.

For the Site 5 Matina River, Talomo-Tugbok District, in their research, the Langub Riverbank is approximately 25 meters and had a depth of less than one meter due to heavy sand and gravel extraction in the area. Heavy siltation is also documented. Aside from the siltation, the river water quality is poor due to leachate from Carmen Sanitary Landfill.

In New Carmen, the river is surrounded by vegetation including bamboos, coconuts, etc. Presence of siltation is observed in the area.

Idis urged the local government unit (LGU) of Davao to conduct a comprehensive threshold study on the number of quarry operations that are taking place along Davao River. This is to protect the waterways from being abused.

Idis Environmental Research Specialist Lemuel Manalo, during the Kapehan sa Dabaw on Monday at SM City Annex, said their group is firm on opposing any application of sand and gravel quarrying because there is no existing baseline yet on the volume of extraction in the river.

“We have no basis on what are the threshold and the capacity of the Davao River and how many operators are allowed for the specific season perhaps. That is what we are asking - that we should have a threshold study,” Manalo said.

Based on their study that they conducted on the Environmental Impacts of sand and gravel quarrying in Davao City, it indicated there that Davao City’s Ordinance No. 032-15 otherwise known as “An Ordinance Closing Off the City of Davao to Mining Operations” prohibits extraction of metallic minerals, protecting the city’s residents and the environment from the many negative effects brought about by this unsustainable practice.

However, Idis said although the ordinance, which provides for the strict regulation of non-metallic mining, has been passed several years ago until now, there is no implementing rules and regulations (IRR).

Idis bared that in December 2018, the Davao City Council approved 30 new commercial sand and gravel applications out of the 64 applicants in addition to the 53 registered quarry operators in the city. The rising number of quarrying operators here is attributed to the current infrastructure developments happening in the city. However, the group said these developments have also an effect on the environment, especially on river systems.

Peliño-Golle said their group is alarmed by the extraction activities by these quarrying operators near the areas that are considered as conservation areas. The Comprehensive Zoning Ordinance prohibits the “exploitation of quarry resources and commercials and sand and gravel resources” in these areas. The Watershed Code also prohibits quarrying in conservation areas in Agroforestry and Agricultural Non-Tillage Areas.