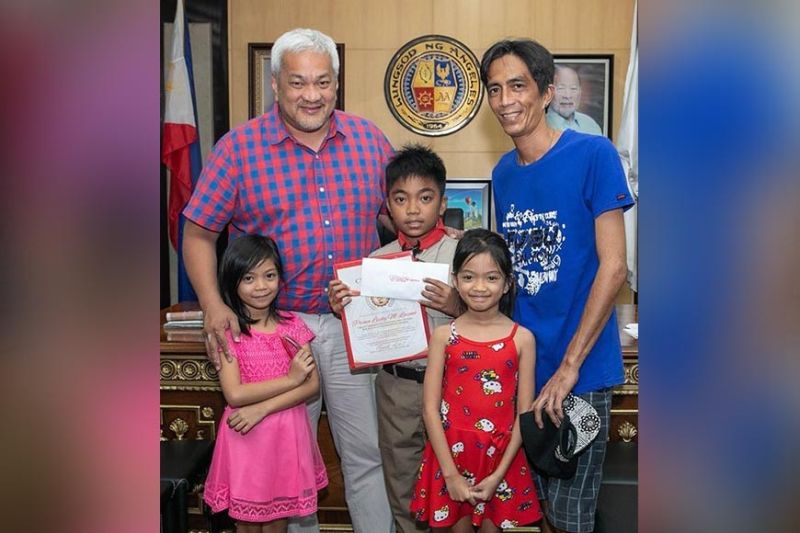 A BOY who passed by the Rafael Lazatin Memorial Medical Center last November 12 and saluted the Philippine flag when he heard the national anthem being played was recognized by Angeles City Mayor Carmelo “Pogi” Lazatin, Jr.

Upon posting the photo of Jomes Sugui in the City Information Office (CIO) page, the boy was identified as Prince Lucky Lozano, a grade 7 student of Angeles City National High School (ACNHS) and a Boy Scout of the Philippines (BSP) member.

When Mayor Lazatin learned the patriotic act of Lozano, he - through Executive Assistant IV Reina Manuel and CIO staff - invited the boy’s family to the Mayor’s Office on November 18.

“What he did was valuable, he is a role model to others. May this act be contagious and leave a mark to everyone who saw the post. Ang kabataan nga talaga ang pag-asa ng bayan,” he said.

The mayor also gave cash assistance to the Lozano family. Lozano, 12, a resident of Barangay Sta. Trinidad, is the eldest among three children and a former student of Don Pepe Henson Memorial School.

Lazatin also commended his parents, Robert and Marissa Lozano, for raising a child who knows how to pay respect and show love to his country.

In accordance with Republic Act No. 8491, Section 21: “During the flag-raising ceremony, the assembly shall stand in formation racing the flag. At the moment the first note of the anthem is heard, everyone in the premises shall come to attention; moving vehicles shall stop. All persons present shall face their right palms over their chests, those with hats shall uncover, while those in military, scouting, security guard, and citizens military training uniforms shall give the salute prescribed by their regulations, which salute shall be completed upon the last note of the anthem.”