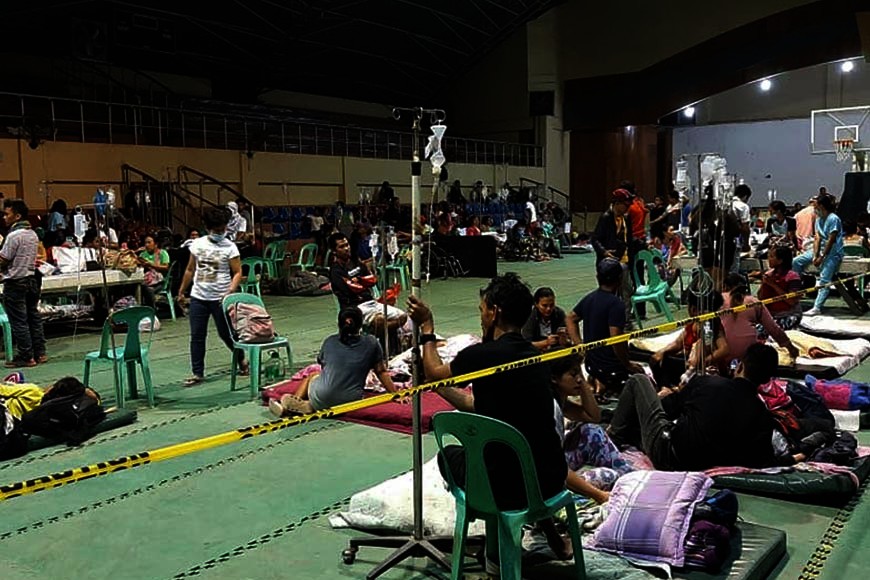 BUKIDNON. Hundreds of patients from Simbulan and Pahilan hospitals in Don Carlos, Bukidnon were transferred to the municipal gymnasium for temporary shelter after a magnitude 5.9 earthquake jolted Kadingilan town and other parts of Mindanao, Monday night, November 18. (Photo courtesy of Jun Abrena)

THE movement of the new and active fault line in Kadingilan, Bukidnon caused the 5.9 magnitude earthquake which rocked towns in the province and some parts of Mindanao around 9:22 p.m., Monday, November 18.

The quake’s epicenter was in Kadingilan town. Over 130 aftershocks were monitored as of 6 a.m. Tuesday, November 19.

Labininay said the fault line, although new, is active and fertile.

According to its Local Disaster Risk Reduction and Management Office (LDRRMO), some 17 villages have incurred damage while four persons suffered injury and trauma after the tremor.

Sixteen houses were damaged, particularly in villages Sibonga and Husayan.

A health center was also damaged in Kibogtok village while a public terminal showed cracks on its columns.

Cracks were likewise seen on a two-story building of two schools.

In Valencia City, Bukidnon, the Esther Hospital incurred cracks while patients were evacuated outdoors. They were advised to return to the hospital at around 12:30 a.m. Tuesday.

All other high-rise hospitals in the city such as the Adventist Medical Center and Valencia Medical Hospital also undertook evacuation but returned three hours later.

Initially, two houses incurred damage but no one was injured.

In Don Carlos town, two hospitals were damaged while cracks were observed in six houses, a gasoline station and a hotel in Maramag town.

The said municipalities also cancelled classes on Tuesday as officials continue to assess the integrity of the structures.