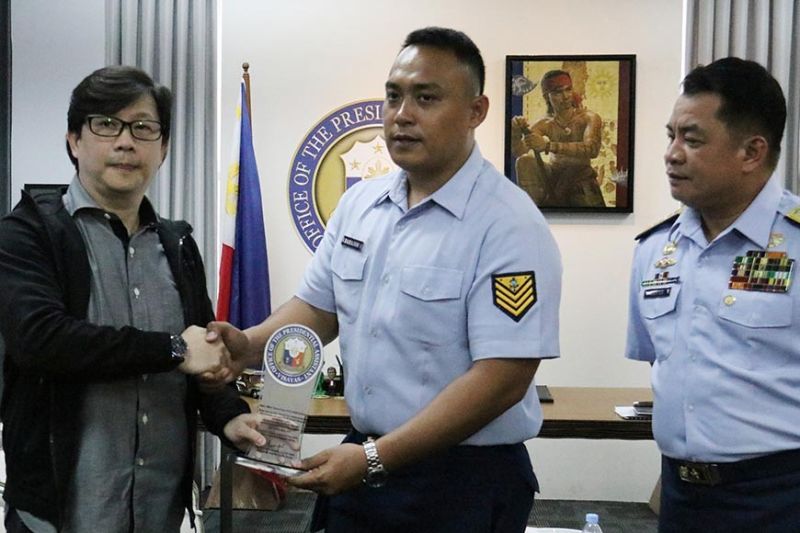 WHEN the fastcraft was sinking, Petty Officer Second Class Ralph Barajan chose not to panic. He guided his fellow passengers, who mostly hailed him as their savior.

Efforts to award the 32-year-old coast guard officer with a medal of valor, the highest military honor, and make him qualify for an International Maritime Organization (IMO) award are in the works.

Barajan, a Bohol native, was off-duty when he was able to save 62 passengers and crew of Mv Siargao Princess before it sank in the waters off Sibonga, southern Cebu on Nov. 7, 2019.

On Tuesday, Nov. 19, his noble act was recognized by the Office of the Presidential Assistant for the Visayas (Opav). He received a plaque of appreciation and P20,000 cash from Opav head Michael Dino.

“What he did was heroic. Hopefully, more Bisaya would become heroes, too,” Dino said in Tagalog.

Before joining the Coast Guard Station Southern Cebu (CGSS), Barajan had worked as a nurse.

He said he just followed his instincts in saving his fellow passengers and the boat’s crew.

“I don’t want anyone to die in front of me,” Barajan said in Tagalog.

As a nurse, he had experiences with several patients who died while he was attending to them.

When tragedy struck Siargao Princess, Barajan said it was a chance not to allow death take even a single life.

“It was time for me to do something that not a single person would die,” Barajan said.

The officer never imagined getting an award for his act.

The tragedy befell on Siargao Princess when no one was expecting it, including Barajan, as the weather was fine.

Barajan’s heroism might be forgotten as time passes, but the opportunity to share to his five-month-old daughter the stories of the people he had saved would be his lifetime token, he said.

“My family is very proud of me,” he said.

“I hope this event will help inspire the youth that being an employee is not all about work,” he said, adding that Barajan’s heroism is his cap after he ends his stint in Central Visayas on Wednesday, Nov. 20.

Gavan is set to assume a higher post in the Philippine Coast Guard headquarters effective Wednesday.

Barajan, Gavan said, could be the first-ever coast guard officer who could qualify for a recognition from the IMO.

Although Barajan is not a soldier, Gavan said Barajan might also qualify as a medal of valor recipient.

The medal of valor is the Armed Forces of the Philippines’ highest military honor awarded for a conspicuous deed of personal bravery or self-sacrifice above and beyond the call of duty.