No major damage reported after quake 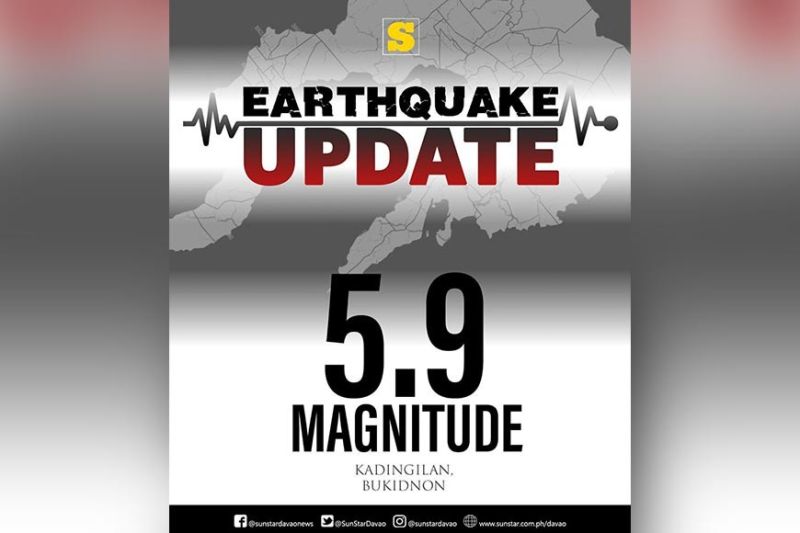 THE Davao City Disaster and Risk Reduction Management Office (CDRRMO) said no major structural damage has been reported following the 5.9-magnitude earthquake that shook Davao City in the evening of November 18.

CDRRMO operations officer Rodrigo Bustillo said no major damage was reported at their office, but there is already an ongoing assessment on the structures that were previously affected by strong tremors last October and for possible new damage that might have surfaced.

Bustillo said there are some cracks seen in some structures but they are not serious to affect its structural integrity. Aside from that, there is also a reported broken pathway in Ponte Verde in Communal, Buhangin, Davao City near the F. Bangoy International Airport triggered by the shaking and rain.

Based on the Department of Science and Technology-Philippine Institute of Volcanology and Seismology's Update Earthquake Information 1 issued on November 18 at 9:22 p.m., a tectonic earthquake with a magnitude of 5.9 and a depth of 10 kilometers hit Kadingilan, Bukidnon.

It was felt at intensity 5 in Kidapawan City, which was seriously hit by a strong earthquake last October, while Davao City and Cotabato City felt it at intensity 4.

With these developments, CDRRMO, through a post on its Facebook page, reminded the public anew to be aware of the disaster and practice the safety procedures in times of earthquake. The public is advised to check the structure of their house should there are cracks or any deformities.

"Atong tan-awon kong ang atong salog or ground flooring wala bay mga pagliki og pagtaas sa ubang bahin sa yuta. Tan-awa kong ang inyong panimalay wala ba nagtakilid o nabulag ang ubang kabahin gikan sa atop nga istruktura. Obserbahi kong ang inyong salog mohulpa kong tamakan (Let's inspect our structure if there are cracks on the floor or uneven surface. Observe if there is a realignment in some parts of your houses or if there are parts which have become separated from the roof to the main structure)," CDRRMO said.

Aside from that, the public must also check the windows, stairs, doors, as well as the floors and the walls to ensure that houses are safe for occupancy.