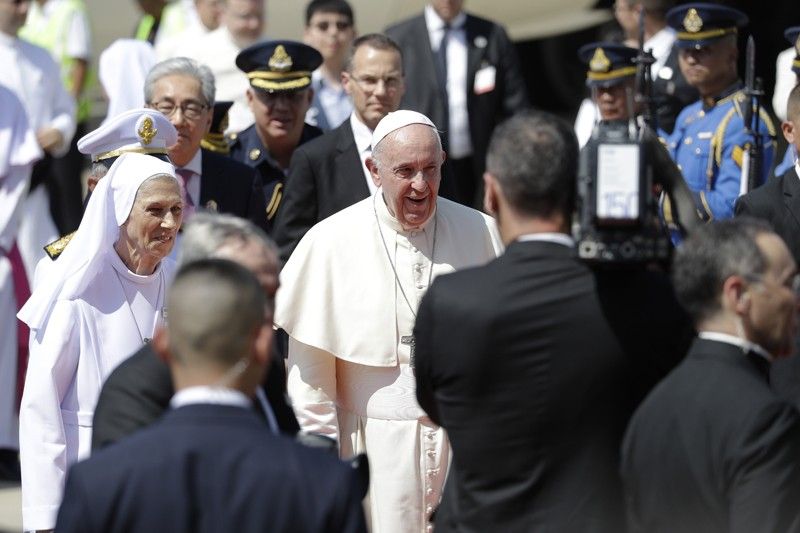 BANGKOK -- Pope Francis arrived in Bangkok on Wednesday, November 20, to begin a tour of Thailand and Japan, beginning a mission to boost the morale of those countries’ tiny minority Catholic communities and speak about issues of concern including human trafficking and peacemaking.

He is expected to highlight his admiration in Thailand for the community’s missionary ancestors who brought the faith to the Buddhist nation centuries ago and endured bouts of persecution as recently as the 1940s.

His warmest welcome, however, came from his second cousin, Sister Ana Rosa Sivori, who has been a missionary in Thailand since the 1960s and will serve as his translator during his time in the country. On stepping down from the plane, the first thing Francis did -- even before his official welcome from Surayud -- was to hug his cousin.

He also met about a dozen children in traditional hilltribe attire. One wearing an elaborate headdress came forward with a huge smile on her face and hugged him. He also received an artillery salute.

Francis’s three-day visit to Thailand, followed by three days in Japan, will be a welcome break for the 82-year-old pope. He is enduring fresh opposition from Catholic conservatives in the U.S. over his recently-concluded meeting on the Amazon as well as a new financial scandal at home.

Leaving those concerns behind, Francis will meet with Thailand’s supreme Buddhist leader, Thai authorities as well as all the Catholic bishops of Asia -- a rare chance for him to address some of the major challenges facing the Catholic Church in the region and the men responsible for dealing with them.

On the eve of the trip, the Vatican secretary of state, Cardinal Pietro Parolin, said interfaith relations and emphasizing the dignity of every person are likely to be raised.

Francis has made the fight against human trafficking a hallmark of his papacy. He is expected to raise this issue in Thailand, which is a key transit point for victims of human trafficking, forced labor and the sex trade.

Francis is also expected to encourage the Catholic community, which represents just 0.58 percent of its 69 million people, as well as encourage the largely Buddhist country to continue welcoming migrants and showing tolerance to people of other faiths. That message is also intended to reach the country’s small Muslim community amid a persistent insurgency in the far south bordering Malaysia.

35 years after St. John Paul II became the first pope to visit Thailand, Francis is marking the 350th anniversary of the creation of a stable apostolic vicariate in Thailand, then known as Siam, after Dominican missionaries first brought the faith in 1567, followed by members of Francis’s own Jesuit order.

Francis will pray at the tomb of Nicholas Bunkerd Kitbamrung, known as the Rev. Benedikto Chunkim, who became the first martyred priest of modern Thailand when he was killed in 1944. Francis is also likely to refer to seven other martyrs killed in 1940 as a nationalistic government sought to convert all Thais to Buddhists.

In the morning ahead of the Pope’s arrival, members of the Catholic community continued preparations for his activities

At the National Stadium, where Francis will be celebrating Mass before tens of thousands of people, students gathered with their band instruments for a costume rehearsal as their parents looked on with excitement.

Eight-year-old Jiraroj Panyam, who will be playing the saxophone, said he hoped to tell the pope to "keep on working hard, have faith and be cheerful."

"I think this is a once in a lifetime opportunity for anyone, not just him, but for everyone no matter what nationality or religion they are," said Mongkol Devapradipa, whose son will also be performing on Thursday, November 21. (AP)