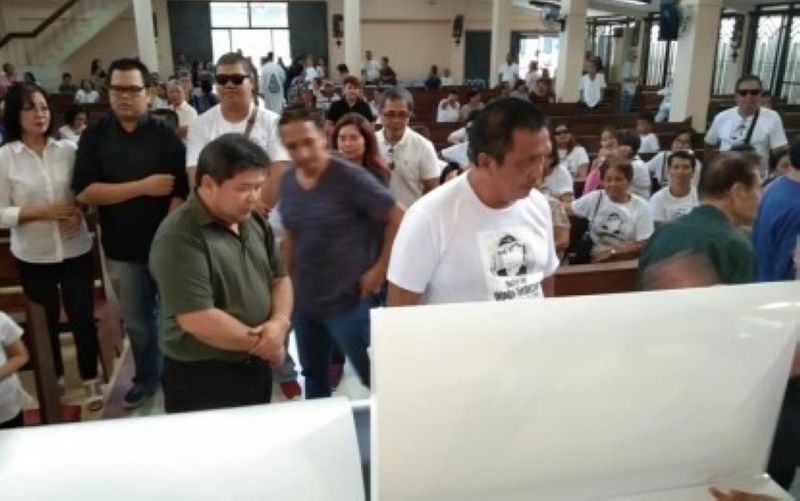 DUMAGUETE. Dumaguete Mayor Felipe Antonio Remollo and Negros Oriental Governor Roel Degamo (left to right) view the remains of the late broadcaster Dindo Generoso shortly before he was laid to rest on Saturday, November 16, 2019, in Dumaguete City. The mayor has vowed not to stop until the “mastermind” behind Generoso’s death is unmasked. (Photo by Juancho Gallarde)

DUMAGUETE City Mayor Felipe Antonio Remollo has vowed to pursue the murder case of broadcaster Dindo Generoso, saying he will not rest until “the mastermind is unmasked.”

The mayor issued this statement during the requiem mass on Saturday for Generoso, 69, who was laid to rest afterward at a memorial park here.

Remollo’s assurance had appeased the mourners as well as other Dumagueteños who are fearful that if the killings won’t stop, what happened to Generoso could also happen to anyone, especially if they speak up against another, one of them told the Philippine News Agency.

After the burial ceremony, Entoma told reporters that the alleged gunman, Police Corporal Roger Rubio, has returned from Manila and is now “restricted to camp” for an administrative complaint against him for allegedly being absent without official leave and for neglect of duty.

On Friday, the Presidential Task Force on Media Security held a press conference announcing the arrest of Rubio.

As this developed, further backtracking of the closed-circuit television (CCTV) footage from the city government showed that on the morning of Nov. 7, the day when Generoso was shot dead, one of the suspects was seen getting in and out of the Mitsubishi Strada silver pickup truck.

The man was seen walking along the boulevard, wearing a jersey shirt, short pants, and slippers, and was talking to two others who disembarked from a brown car in front of a resto-bar down the boulevard.

Follow-up investigation disclosed that the alleged gunman may not be Rubio and the driver of the motorcycle could not be retired policeman Glenn Corsame, although they could be part of the entire plan to kill Generoso, police sources here said.

Remollo considers Dindo Generoso a “modern-day hero”, saying he defended the city when the CCTV system acquisition by City Hall was attacked.

Generoso was the anchor of a block time program on dyEM FM Bai Radio 96.7 with the city government paying for the airtime, the City Public Information Office had previously confirmed.

“And Dindo was the first to benefit from the CCTV installation,” Remollo said, referring to how the video footage had helped the police in the arrest of two suspects several hours after the crime was committed. (PNA)