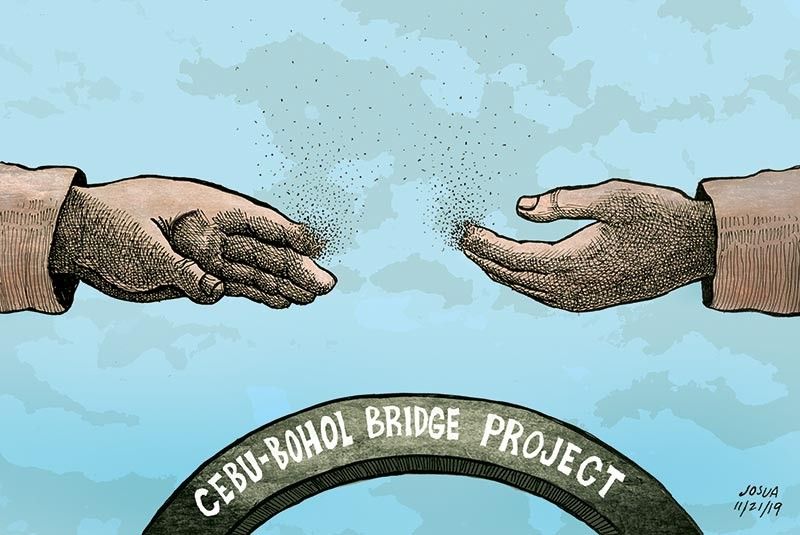 IF WE went by the optimism of Bohol Rep. Erico Aristotle Aumentado last year, we’d be painfully hitting a brick wall to realize that the “Cebu-Bohol friendship bridge” is no item in the government’s projects list.

The congressman from Bohol assured with confidence in 2018 that the 24.5-kilometer chain of bridges and causeways would see the light of day because his father, the late governor Erico Aumentado, already had a battery of feasibility studies and consultations on the project during the latter’s incumbency.

The “friendship bridge,” a part of it is supposedly the now-in-progress Cebu-Cordova link, would go all the way to Getafe, Bohol. The late Aumentado described it as the “three-in-one bridge,” referring to the other objectives of the bridge: It would have carried power cables from Cebu to Bohol and pipelines to bring potable water from Bohol to Cebu.

Rep. Aumentado announced last year that the Asian Development Bank had released its funding for the project’s feasibility study, saying it would be done in six to 10 months. The bidding, he assured, would take place this year and construction in 2020.

Early this year, the fantasy heightened when photos of the supposed model of the friendship bridge went viral on social media, reaching over 5,000 shares, with the text: “Wow, so much wow...from Jetafe Cebu Cordova open Bridge Bohol Philippines easy to travel #WE CAN NOW ROAM AROUND.”

Imagine that game-changing bridge and the breath of vibrancy it would have blown to animate trade and tourism in this part of the region.

Well now, the dream hits the other end of its arch as Economic Planning Secretary Ernesto Pernia announced that the Cebu-Bohol bridge is one among the big-ticket infrastructures that are shelved for reasons of unfeasibility, economic viability, and financial requirements. Department of Public Works and Highways Central Visayas Director said the project is not feasible. The technology needed to build it “does not exist because the sea is very deep,” he said.

It makes us wonder what the project’s vocal proponents and optimists knew that we didn’t. What were in the pre-feasibility studies that fueled their confidence in the first place?