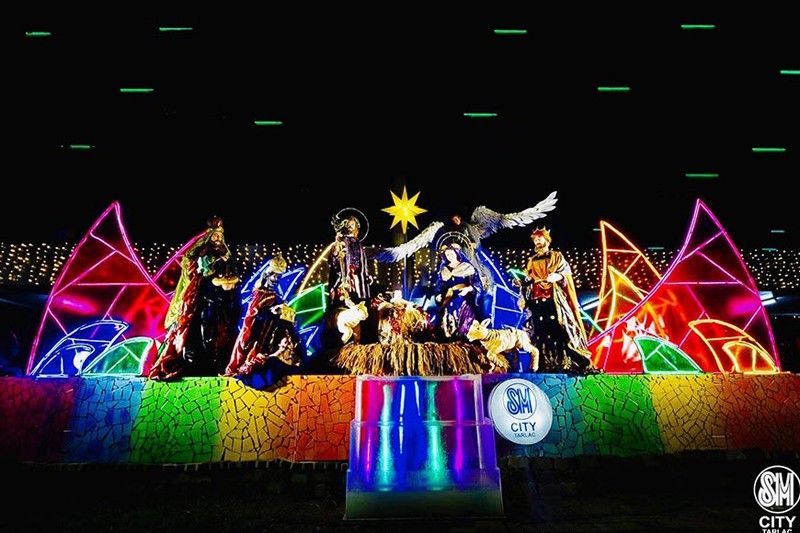 CLARK FREEPORT -- A shopping mall in Tarlac City is set to join the upcoming Belenismo competition in their province.

After two consecutive triumphs in capturing the hearts of Tarlacqueños in the province-wide Belenismo competition, SM City Tarlac (SMTL) crafted another grand centerpiece that will allure not only one’s eyes but also captivate one’s spirit and soul.

The 42-foot Belen is a grand spectacle showcasing the versatility of employing indigenous materials as well as recycled ones.

Inspired by the biblical account of God’s marvelous intervention in parting the Red Sea to make way for the escaping Israelites, led by Moses from the pursuing Egyptians, the newly crafted Belen sits on a multi-colored fountain amid bright, divergently colored panels depicting the miraculous scene in the book of Exodus.

Outlined with colored lights, the wave-like panels, three feet to ten feet in height, refract light which adds a whole new dimension to the beautiful spectacle.

Signifying God as the source of life, purity, and wisdom, a nine-foot fountain in the middle enlivens the Belen. Its intricate design is given life by one of Tarlac’s main agricultural products – sugarcane.

Complementing the colorful water-and-light-producing fountain were indigenous jute sacks and bagasse fibers wrapped around it. Bagasse is a pulp-like residue after extracting the sugarcane stalks.

For a sophisticated flowing water effect of the fountain, SMTL opted to use treated wastewater from the mall’s Sewage Treatment Plant to further promote environmental sustainability.

The Holy Family, the Three Kings, and the angel were swathed in both shiny and textured fabrics, thereby adding heavenly appeal to the picturesque display. Plus, the creative use of real hay for the manger not only relives the biblical scene, but also highlights another major product of Tarlac.

The three main characters - Mary, Joseph and baby Jesus - were brought to life through robotic technology. Thus, our Belen comes to life not only on stage but also in the sight and insight of the spectators.

SMTL Belen’s base platform was made of cracked, damaged tiles from the warehouse of the mall. These were repainted and placed in fastidious manner to achieve a bright, gradient effect.

The colors of the Belen represent the liturgical seasons which are blue and rose (pink) for Advent, yellow for Easter, orange (gold) for Christmas and green for Epiphany. This artistic alignment of the symbolic colors showcases the splendor of God’s grace over His creations such that God’s glory and greatness is reflected by them as a testimony of His magnificence.

The Belen was created by 30 artistic hands and minds who collaborated and labored together for a month to deliver this wonderful monument of the Christmas season.

As tourists appreciates the Belen, they could also have the opportunity to submit themselves into prayer as the Belen displays four renditions of the “Prayer Before The Belen” - in English, Filipino, Kapampangan, and Ilocano.

The Belen is open for viewing and photo sessions from November 4, 2019 until the Epiphany of 2020.