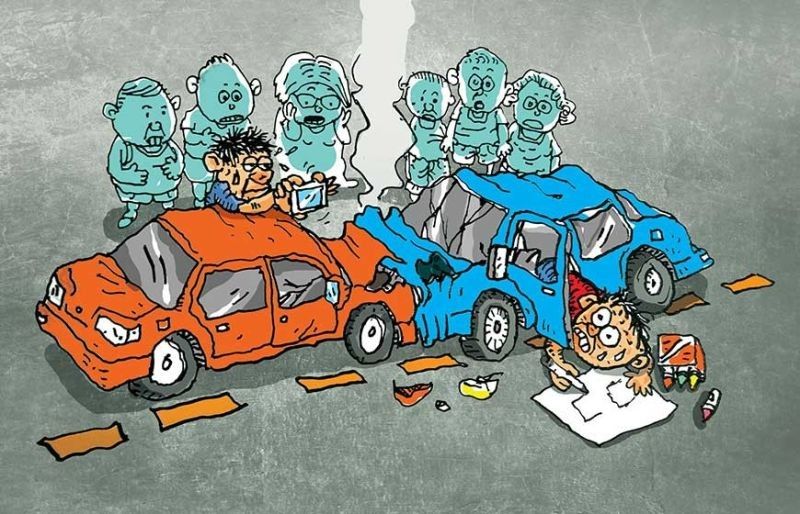 NETIZENS poked fun at the proposed ordinance in Talisay City requiring motorists to bring their own chalk and other marking devices.

The draft ordinance states that a citation ticket would be issued to a driver if he failed to mark his vehicle during a minor incident.

The measure, authored by City Councilor Ferdinand Rabaya, seeks to solve traffic jams caused by minor vehicular collisions by requiring motorists to mark their own vehicles while waiting for the traffic investigators to arrive.

Rabaya’s proposed ordinance also states that drivers must take pictures of their vehicles before pulling them out of the road.

The measure drew flak on social media with several netizens saying that investigating a vehicular incident is the job of traffic officers.

Aside from Soon’s comments, SunStar Cebu selected some opinions on the issue from Superbalita Cebu’s Facebook page.

Judy Largo wrote that she saw several traffic enforcers under the flyover in Barangay Tabunok.

She suggested to Talisay City traffic head Jonathan Tumulak to transfer some of his personnel at the Cebu South Coastal Road.

Largo said that parked tricycles block the flow of traffic along the bridge in Barangay Bulacao every afternoon.

Others questioned the efficiency of the proposed ordinance when a road incident happens during a rainy day.

Some doubted the accuracy of the markings that would be made by motorists involved in a vehicular incident without the presence of a traffic enforcer, whose role is to serve as mediator.

Jherimie Levis wrote: “Mamahimo na jud og investigator ani ang both party na magbinanggaay. Pagka human, di magkasinabot kay sayop og sketch ang matag usa. Sumbagay ang ending (Both parties involved in a road incident would act like they are the investigators. They could have disagreements if their sketches are erroneous. The ending could be a fistfight).”

A few netizens agreed that the proposed ordinance could help decongest traffic should a minor vehicular incident occur in the city.

Aaron Russell Mactao Cañeda said the legislation, if approved by the City Council, would be a big help in preventing heavy traffic as the vehicles would be pulled out of the road while waiting for the investigators’ arrival in the place of incident.

“I think it would not be a burden to buy a chalk as it is not expensive,” Cañeda wrote in Cebuano. “Someone asked if the driver could not get up. What was reported was that (the proposed ordinance) would be applicable to a minor accident.” (RGT)