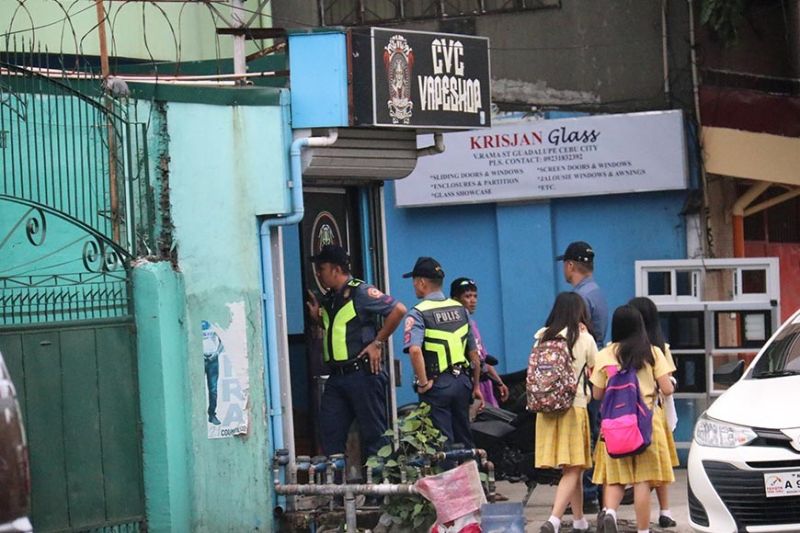 VISIT. Policemen check this vape shop along V. Rama Avenue, Cebu City but their chief later said the visit was part of the daily roving duties of his men. (SunStar photo / Amper Campaña)

THE ban on the use of vapes and electronic cigarettes in public has caused confusion and anxiety as police started warning users and confiscating devices even as questions on the order’s legal basis were raised.

A vape user said they are confused as to why they should be arrested. Vape shop owners reached by SunStar Cebu on Wednesday, Nov. 20, 2019, preferred not to comment.

Police offices here gave conflicting interpretations on what actions to take on violators. The Police Regional Office 7 will arrest vape and e-cigarette users in public places, but the Cebu Police Provincial Office would prefer to warn users but confiscate their vaping devices.

As to the legal basis of such ban, a retired executive judge said there should first be a prohibiting law or statute making the use of vape and e-cigarettes illegal. Only then can users be arrested.

The President’s order stemmed from the confirmation by the Department of Health (DOH) of a case in Cebu where a minor was hospitalized due to lung injury caused by using a vape.

However, Cebu Provincial Police Office Director Roderick Mariano said there will be no arrests. Those violating the ban will be warned and their vaping devices confiscated.

Mariano said they have yet to receive the implementing rules and regulations of Duterte’s Executive Order (EO) 26. Once they receive the guidelines, they will implement the orders, he said.

In Talisay City, police collected at least seven vaping devices and e-cigarettes Wednesday afternoon. The devices were either voluntarily surrendered to the police or were confiscated from their owners.

In Barangay Guadalupe, Cebu City, policemen visited a vape establishment along V. Rama. Police Capt. Janelito Marquez, Station 9 chief, said the policemen were just doing their daily roving routine and there was no order to inspect such establishments.

Meinrado Paredes, a retired Regional Trial Court executive judge, said that, for as long as there is no precise law or statute making the use of vape and e-cigarettes illegal, the arrest of users has no legal basis.

He said there should be a prohibiting law or statute first, which would expressly mention and define vape or e-cigarette in its coverage, before its use can be considered a crime.

“The President is not a lawmaker. We have separation of powers. Only Congress can make laws and delegate the power to make laws to local government units,” he added.

Dante (not his real name), a vape user, said he has been vaping for nine years now. “I started vaping at a legal age. The vaping community in the country consists of hundreds or thousands, if not millions, of users, so what bothers me is, why now?” he said.

Dante said he uses products from reputable companies and he and fellow vape users are confused over why they will be arrested.

“What is unfair is the arrest. They can always issue us citation tickets. There are many smokers in other public areas, why aren’t they arrested yet?” he asked. (AYB, WBS, FMD, JOB, SunStar Philippines)