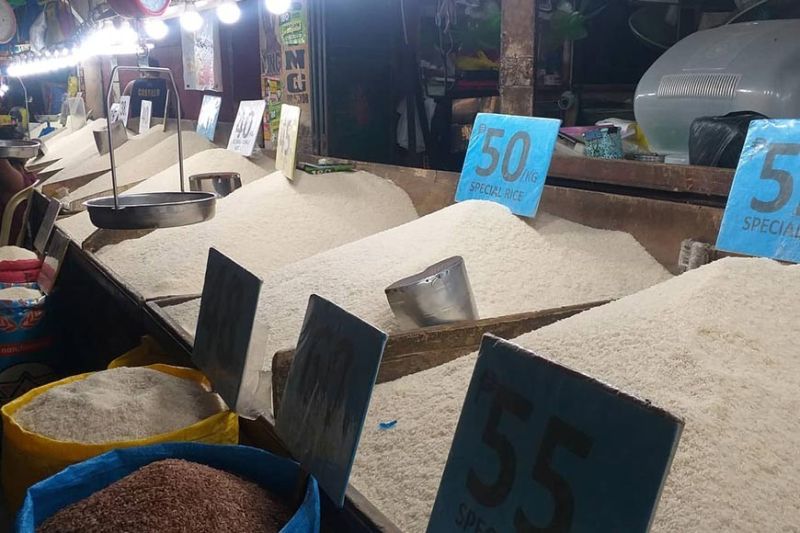 BACOLOD. Price of rice among retail markets in province ranges from P40 to 52 per kilogram, which is higher than the farmgate price of palay at P10 to P13 per kilogram. (Photo by Erwin P. Nicavera)

LIKE some other provinces in the country, the gap between the farmgate price of palay (unhusked rice) and retail price of rice in the market has also widened in Negros Occidental.

The Office of the Provincial Agriculturist (OPA) reported that current buying price of palay in the province ranges from P10 to P13 per kilogram, still lower than the previous price of P18 to P20 per kilogram before the implementation of the Rice Tariffication Law.

However, current retail price of rice sold at Bacolod City Central Market, one of the biggest public markets in the province, ranges from P40 to P52 per kilogram, which shows a gap of at least P30 in palay and rice prices in the province.

Provincial Agriculturist Japhet Masculino said “there’s a disconnect” as the price of rice among retail outlets seemed not moving below P40 per kilogram while the farmgate price of palay continues to drop.

Though it’s hard to say there’s “hoarding” as the term has technical definition, Masculino said someone might be “controlling” the volume being released so it won’t flood the market.

“Otherwise, if there’s over supply and less demand, the price will go down,” he said, adding that, in terms of measures, OPA can only monitor the prices.

On Tuesday, November 19, the Department of Finance (DOF) said it is investigating if unscrupulous rice traders have been taking advantage of the liberalized importation of rice amid the wide price gap between palay and retail rice prices in some provinces.

The agency, in a report, said it is closely monitoring potential distortions in the market, particularly the price gap between farm gate and retail prices.

Aside from Negros Occidental, the gap between the per-kilo retail price of regular milled rice and farm gate price of dry palay is also widest in the provinces of Iloilo, Zamboanga del Norte, Kalinga, and Bulacan.

The average gap is around P22 as the average retail price is P37.51 per kilo compared to dry palay farm gate average price of P15.71 per kilo, it added.

For farmer-members of the Newton-Camingawan-Para (Necapa) Farmers Association at Barangay Taloc in Bago City, the province’s rice granary, they are bracing for low farmgate price of palay during the second cropping starting December this year to February next year.

Myrna Villa, chairman of Necapa, said they were able to sell their palay to traders at P14 to P15 per kilogram during the last cropping.

But with the current P10 to P13 farmgate price, Villa said their 200 farmer-members fear for possible losses as production cost stays at P12 per kilogram.

“We already wrote a letter to the provincial government expressing our intention to sell our palay to them,” she said, adding that the association will also be tapping the National Food Authority (NFA) that buys palay at P19 per kilogram.

The farmer lamented that while the farmgate price of palay shrinks, the cost of farm inputs stays high.

As strategy, Necapa plans to mill and dry their produce and look for other buyers mainly those from the government.

“We urged the government’s intervention in this very low farmgate price of palay,” Villa said, adding that the price disparity should be investigated.

For rice retailer Jonathan Bustillo, they are not dictating the “high” prices of rice in the market.

Bustillo said they can do nothing as the prices of rice they purchase from the traders are also high.

Meanwhile, Senate Committee on Agriculture and Food Senator Cynthia Villar said there is really rice hoarding in the country.

Villar, who was in the province yesterday, said the government has been working on eliminating rice hoarders.

“In fact, we are encouraging the governors of rice-producing provinces to borrow from the Land Bank of the Philippines at two percent interest for them to buy the palay produce of their constituents to lessen hoarding,” she added.