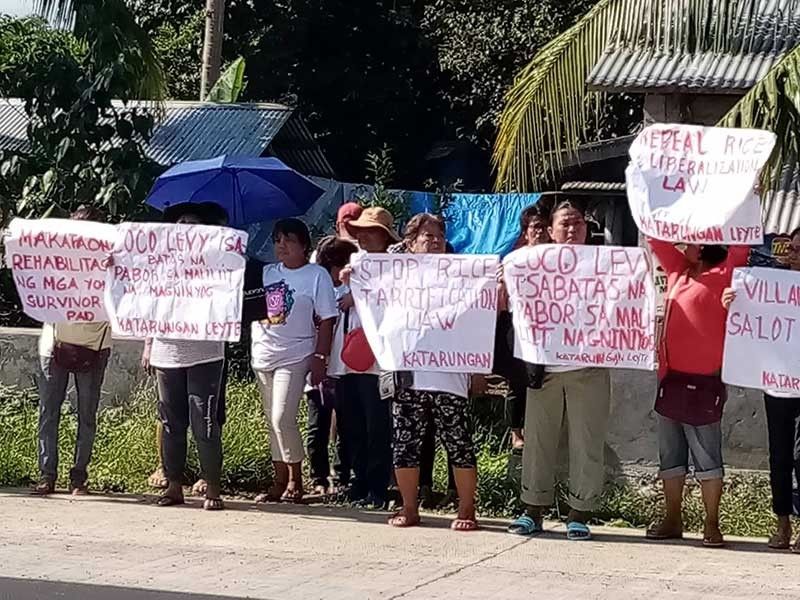 LOURDES Cabelis, a 53-year-old mother of two, joined other farmers in a lightning rally in Barugo, Leyte as part of a nationwide protest against rice tariffication.

“If the government is sincere (in wanting) to help the farmers, (officials) should go down to the farms and see for themselves our real situation,” Cabelis, who hails from Barugo, Leyte, said.

Land reform advocacy group Katarungan launched the protest in behalf of the rice farmers, who have been reeling from the low farmgate prices of palay (unhusked rice) as a result of rice tariffication.

“We, the farmers and major stakeholders in the rice industry, launch this nationwide protest to help the public understand the hardships that we are suffering at present and to express our disenchantment and frustration over government’s failure to address the crisis at hand,” said Jansept Geronimo, national spokesperson of Katarungan.

Under the Rice Liberalization Act, or Republic Act (RA) 11203, quantitative restrictions on rice imports are removed and replaced with tariffs of 35 percent on rice coming from Association of Southeast Asian Nations (Asean) members.

A manifesto signed by 36 farmers’ groups said the law “not only ‘tariffied’ rice at a rate that unfairly caused huge losses in farmers’ incomes, it also unilaterally liberalized the rice industry by removing almost all major government controls over rice imports and domestic trade”.

The government adopted rice tariffication in a bid to bring down prices of rice and tame inflation, which was elevated for most of 2018.

Following the implementation of rice tariffs in March 2019, farmgate prices of palay have decreased.

According to the Philippine Statistics Authority (PSA), the average farmgate price of palay went down by 23.5 percent to P15.52 per kilogram as of the first week of November 2019 from P20.28 per kilogram in the same week in 2018.

“With annual palay production at 19 million tons, every peso decline in palay prices means taking away P19 billion from the pockets of small farmers. We estimate that total losses of farmers for 2019 alone could reach P 140 billion, or P 30,000 per hectare. This is more than 10 times the damage wrought by Typhoon Yolanda to the agriculture sector in 2013, and it is all man-made,” the farmers said in their manifesto.

They warned of a brewing socioeconomic and humanitarian crisis in poverty-stricken rural areas because of the low palay prices.

“Farmers will default on their debt payments and may fail to borrow again for the next season. They may have to stop their children’s schooling. They will find it difficult to feed their families or buy medicine for their sick children,” said Geronimo.

“Many of them may stop farming altogether. Ironically, farmers were better off when quantitative restrictions on imports were still in place. They are now barely surviving because of a law that was touted to be good for them,” he added.

Five days after the signing of the Rice Tariffication Law in February 14, 2019, Socioeconomic Planning Secretary Ernesto Pernia declared that the law “ushers in a new rice policy that will set in motion big reforms in the agriculture sector and will ensure the availability of cheaper rice (closer to world prices) in the market.”

According to the socioeconomic chief, the P10-billion Rice Competitiveness Enhancement Fund will be used “to provide key interventions to support farmers and enhance their competitiveness and profitability, including farm machinery and equipment to improve farm operations, rice seed development, propagation, and promotion, expanded rice credit, and extension services.”

“A portion of the rice tariff revenues in excess of P10 billion will be used to provide direct financial assistance to rice farmers affected by the removal of the quantitative restrictions and for diversification to high-value crops,” Pernia said.

“When farmers sell their rice to some private buyers, the rate goes down from P15 per kilo to P14 and P12, depending on the rice moisture. If it rains, the lower it goes,” said Daganasol, president of Katarungan-Eastern Visayas.

“What we demand is that there should also be a government agency that will buy our palay, and not the private businessmen alone,” added Cabelis, who led a signature campaign for 10,000 farmers in Leyte and Samar against the said law.

Duterte, aside from ordering the suspension of rice importations, asked Congress and the Department of Agriculture to set aside P3 billion for the purchase of rice grown by Filipino farmers.

The farmers said they need more support for their seeds, fertilizer, and farm equipment.

“Unfortunately, the farmers don’t receive much,” said Daganasol, adding that that the lack of government assistance hindered their productivity.